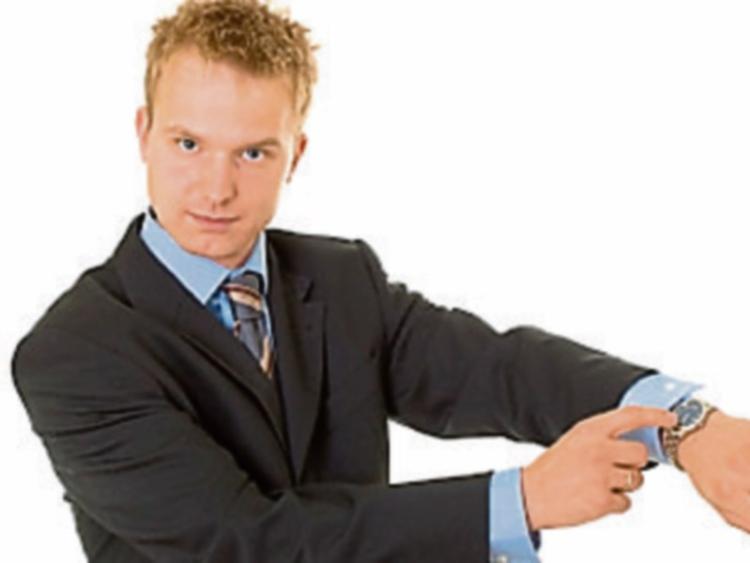 Teach 'Johnny Come Late All The Time' a lesson in punctuality, says JBK

DURING the past ten years I must have made a thousand appointments with people drawn from all walks of life. There were teachers, tailors, tallymen, doctors, dentists, departmental heads. You name it and I’ve been appointed with it.

The gentle reader will say: All very fine - but where is all this taking us?

It is, of course, taking us to a conclusion which I have drawn from having made these thousand appointments over the past ten years. Out of the thousand, as I recall, only three people were dead on time. Then more were near enough but the other nine hundred and eighty-seven were between a quarter of an hour and two hours late.

Some offered excuses. Some did not. They took it for granted that it would be expected that they would be late. I remember on a few occasions going to Dublin to meet people. They were never on time.

More recently this habit of being unpunctual is spreading. Even people who get well paid for being on time are never on time and nobody seem to take any notice. There is no reprimand. It is the done thing.

Because of too many late appointments this year I have just lately made myself a promise. The promise is this. If, from now on, people with whom I have made appointments are not on time, I will make myself unavailable. It may not make the unpunctual punctual but it will make them punctual when dealing with me and any other venturesome fellow like me who might decide that three o’clock is three o’clock and not twenty to four.

I have no figures at my disposal but I have no doubt at all that this national pastime of not being on time is costing several million pounds a month and is an all-round blunting of efficiency because of it.

Be on time next time you make an appointment. You won’t be late for your meals or for the cinema, so why the hell should you be late for something that is important or for something which earns you a fine fat salary?

MY friend and yours, the one and only Jack Faulkner, absented himself from his lovely home in Glin one day last week and honoured us with his presence in Listowel. He came to Listowel for the quarterly horse fair.

In the bar the discussion turned to soup and a man who had come over on the ferry from Clare declared he was going for a plate of soup before going home.

“Cabbage water would be better for you,” said Jack Faulkner.

“How do you make that out?” said the man from Clare.

“In the cabbage water,” Jack replied, “you have the advantage of the greens, and there’s nothing the bate of greens whether you’re married or single. Of what use is a puck without greens, will you tell me? Lock up your puck with a supply of green cabbage and he’ll earn his hire no bother.”

“What about soup?” I prompted.

“What use is it when the mate is whipped out of it?” was Jack’s answer.

“Put back the mate into it and I won’t say no more about it.”

This stymied all present. The Clareman seemed reluctant to go for his soup and I was reminded of a story I heard many years ago.

A man from the heart of Kerry went to buy sheep at Limerick sales during the economic war.

He made his purchase and had a few drinks before deciding to eat his dinner prior to making the long journey home. He went into a good class restaurant and called a waitress.

In those days, there was no choice of courses in most eating houses, hotels excepted.

The main course was roast beef. Our man from Kerry was a simple chap who was not acquainted with the distribution of course. When he sat down to his dinner he got it all together and there was no such a thing as a four-courser or a three-courser.

While waiting for his dinner he lighted his pipe and counted his money. When the count was finished the waitress arrived with the first course which was a plate of soup.

“I didn’t ask for that,” said the man from Kerry. “I asked you for my dinner.”

“This,” said the waitress, is only the soup.”

“I know ‘tis only the soup,” said our friend.

“Faith you’re right, I won’t drink it,” said the Kerryman.

“And pray why not?” asked the waitress.

“Because that’s why so,” said the Kerryman, “but I’ll tell you what you can do with it.”

“What would that be?” she asked.

“You can give it to them that ate the mate out of it.” With that, he stuck his pipe in his mouth and quit the scene.

NOW FROM 86, Mora Road, Cricklewood, London, comes a letter from John Dowling. He writes as follows:

“Dear Mr. Keane, while I have been in England, I have read your column in the Leader. I would like to ask you a favour concerning the prison escape at Limerick fifty years ago.

“I happen to be one of the men that dug the tunnel and escaped on Holy Thursday night, 1923. Out of the sixteen prisoners who escaped, four were Kerrymen, including Pikey McElligott, the man who planned it. I would like to know how many of the escapees are still alive. I sure would like to meet them, also a man called Paddy Landers, who was in charge of the cookhouse from where the tunnel started.

“I am sorry I have taken a liberty by asking you. I am old and live alone. I sure would like to meet anyone who is still living from that escape and get in touch with them. You will excuse the writing. I would appreciate if you could help me find my old comrades.

“I enjoy your article every week. I was in the Munster Fusiliers with a Jack Faulkner in nineteen nineteen. Maybe he is the same man. Yours truly, John Dowling, 1st Battalion, West Limerick Brigade, I.R.A.”

Thank you John Dowling. I’m sure you’ll be hearing from some of your comrades. About the Jack Faulkner who was in the Munster Fusiliers - this was surely Mikey Faulkner, Jack’s father.

Our own Jack Faulkner, who has so often in the past adorned these columns, would have been a very small boy at the time. However, when his country needed him the same Jack joined the Volunteers and served with distinction throughout the Second World War.

He left the army as he entered it, a private soldier. As he has often said down the years: “I am there tomorrow if they want me, because old soldiers never die.”

The late, great John B Keane was a Leader columnist for more than 30 years. This column first appeared in our edition of April 28 1973

A WOMAN with nineteen children went to the doctor and said she wanted no more children.

“Stop sleeping with your husband,” the doctor told her.

“Then get an electric blanket,” said the doctor.

“I think an electric fence would be a better idea,” said the mother.