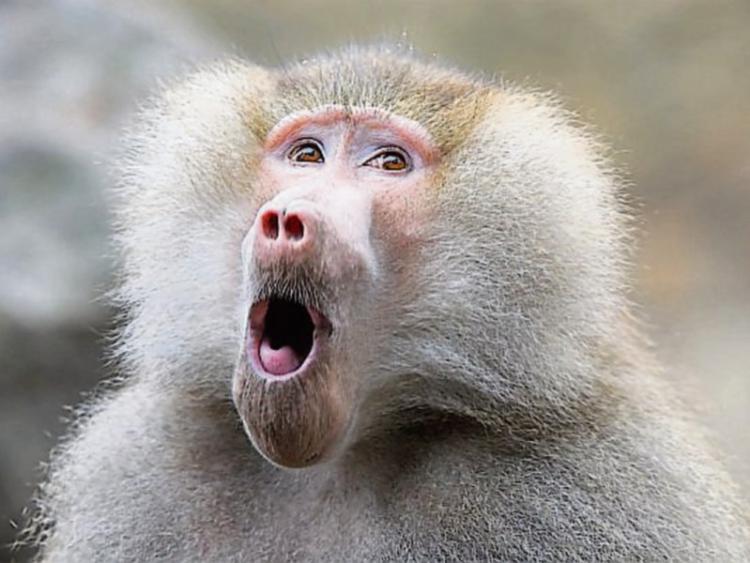 At Glin Carnival I ran into the one and only Jack Wilberforce Faulkner.

He was in excellent form and when I introduced him to some friends he regaled them with many fine anecdotes and tales of his early life including his now famous encounter with a baboon when he was a driver with Duffy’s circus.

Jack also saved two women from drowning in the County Clare but this has been acknowledged many times before.

We ordered some drinks and settled down for an amiable discussion. Unfortunately, however, a drunken man insisted on singing a song close by so that we could hardly hear ourselves.

“He’s very drunk,” said one of my friends.

“No,” said Jack. “If you gave that fellow a suck of a whiskey cork and put him sitting on a porter barrell ‘twould be enough to make him drunk for days.”

When Jack was on his honeymoon on the roads of Ireland times were very bad and it was no joke trying to keep body and soul together. One day they came across what seemed to be a rick of parsnips and Jack and his bride, being very partial to mashed parsnips, loaded up with enough to last them a long time.

It turned out to be a bitterly cold night so they decided to ask a farmer outside Abbeyfeale for shelter. He was slow enough about it but when they told him they had a load of parsnips he agreed.

They put down the parsnips and spoke about the weather.

Now and then Jack would prod the parsnips to see if they were boiled. They were as hard after an hour’s boiling as they were before they were put down. More turf was put on the fire and soon, according to Jack, there was a regular bonfire.

Still there was no stir out of the parsnips.

After two hours they put on bog deal and the fire was so hot that they were nearly roasted out of the kitchen. At this point in the proceedings a neighbour called and out of honest neighbourly curiosity looked into the pot.

“These are not parsnips at all,” he announced, “these are sugar beets.”

The man was telling the truth and to this very day every time Jack Faulkner passes a heap of sugar beet he thinks of his honeymoon.

His most colourful experience of course and one that always bears re-telling was his encounter with Bongo, the cantankerous baboon who was one of the stars of Duffy’s circus.

Bongo and Jack got on well at first and Jack taught him many a useful trick which often brought the house down. Finally, Jack decided the time had come to teach Bongo how to smoke. One day he lit a Woodbine and took a few drags, indicating to Bongo that he should do the same.

He handed the lighted cigarette to Bongo through the bars of the cage. The monkey accepted and dragged successfully at the cigarette. He took a few more pulls and then put the lighting side into his mouth.

The creature went berserk, screaming and leaping all over the place. Jack decided to beat a hasty retreat.

Months later while Jack was cleaning out from the elephants, he made the mistake of backing towards Bongo’s cage. The baboon thrust out a hairy paw and almost ripped off the Faulkner’s scalp. Six hours and twenty seven stitches later Jack woke up in hospital. There was a nun by his side and Jack thought he might be in heaven.

His joy was short-lived when he found out the truth, that he had to face the crazy world again. Still he had learned his lesson. He never became chummy with a monkey thereafter.

“If I met one tomorrow,” Jack told us, “him and me would pass without saluting.”

Mowing hay by the scythe is the in thing at the moment. With a scarcity of this valuable crop more than likely because of increased dairy herds, patches of land which have proved too uneven or too slanted for the mowing machine are now being denuded of hay by mowers with scythes.

There is no parish in West Limerick or North Kerry without its tall tales of legendary mowers and indeed without its true stories.

In the village of Ballyduff recently, I heard a true story about a man called Dinny Burke who was reputed to be the greatest mower of all times. From dawn until dark he often cut very close on two full acres of hay or an acre and a half in the Irish measure.

Even the neighbouring parishes admitted that they could not boast his equal.

Now during Dinny’s heyday there lived near him a certain landlord who owned a great deal of arable land which he hardly used. A neighbour of Dinny’s, a poor man wanted to marry and he had the price of an English acre of land. When the landlord wanted work done he paid by the Irish acre but when he sold land he sold by the Irish acre.

Dinny's neighbour went to the landlord and asked him to sell an acre of land. The landlord agreed but the amount of land he offered seemed a good deal less than an acre. The neighbour refused to pay.

“Alright,” said the landlord who needed the money for drink, “what would you call an honest acre.”

“As much as Dinny Burke would cut in a full day,” the neighbour replied. The landlord was agreeable and the money changed hands. At dawn the next fine day Dinny Burke appeared and when the landlord rose with a sick head around eleven o’clock there was three-quarters of an acre knocked. He called Dinny into the kitchen and complimented him.

He insisted he have a drink and when Dinny accepted he was presented with a fine tumbler of beer. He returned to the meadow only to find that he had an instant call of nature. Afterwards he sharpened his scythe and fell to work with a will but no sooner did he attempt to mow than nature intervened.

He had no chance and he realised that unless something drastic was done his neighbour would come off badly.

He thought for awhile and then an idea struck him. It was a fine warm day so he stripped to the skin and mowed away to his heart’s content.

By nightfall he had cut two acres. The same Dinny Burke is now mowing the meadows of heaven and in that pure clime nobody notices whether a mower is dressed or undressed.

The late, great John B Keane was a Leader columnist for more than 30 years. This column first appeared in our edition of Saturday, August 5 1972