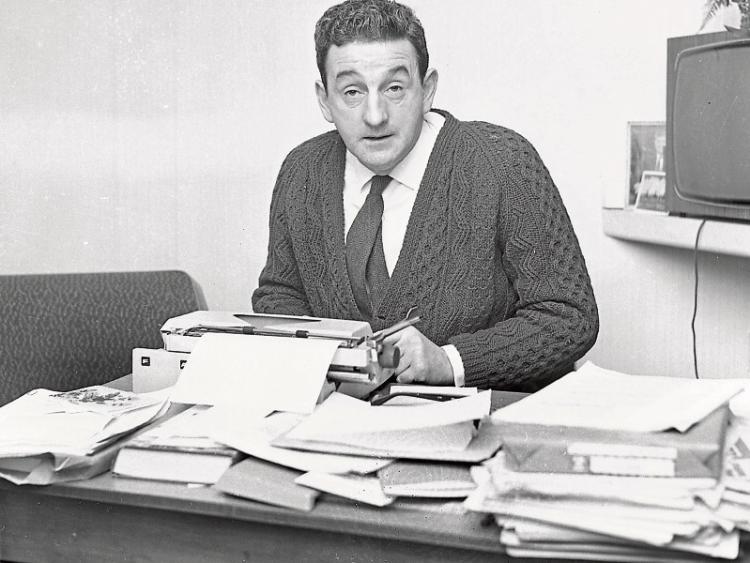 THE MEN’S mission in Listowel finished last Sunday night and the women’s mission finished the Sunday before.

They were both well attended although crowds have fallen off to an alarming degree. I remembered when I first went to a men’s mission there was no standing room. Now there are hundreds of empty places crying out for sinners. Be that as it may, the recent mission was very successful and in spite of the falling off in numbers I daresay it was above average.

My first ever mission was a somewhat frightening affair. I was in the company of my father and a brother. I was 12 and the senior missioner was a fat red-faced man with a voice that struck terror into the hearts of the congregation whenever he lifted it. He was death down on close dancing.

“There they are,” he would roar, “in the hell they call a ballroom with their bellies touching and evil thoughts raging in their depraved minds.” The brother used to squirm in his seat and try to hide. Afterwards I knew how he felt. He fancied himself as a slow waltzer and as everybody knows, slow waltzing means close dancing.

“They will rot,” the missioner would roar, “in the dungeons of hell. Their charred bodies will be contorted from the agonising plain and their screams will rise above the roaring of the flames.” He would go on in this vein for a quarter of an hour while the sweat flowed freely from the pores of the many close dancers who sat with bent heads, fervently praying that it would end.

In later years there came another smaller missioner who had a thing about motor cars. Travelling brothels, he used to call them.

“They will never see God,” he would roar at the top of his voice. “He who would lure a young woman into the back seat of his car is worse than an animal.” At this time I used to do a bit of courting in the back seat of a car myself, that is whenever we were lucky enough to get the loan of a car. I didn’t lure the girl in. She was quite willing and all that went on was a piece of handholding and maybe kiss or two. Nevertheless, my face would become suffused with the blushes of shame and I would wish for the ground to open and swallow me up.

Seriously speaking the roaring missioner must take a lot of blame for keeping people out of the churches and for unnecessarily filling many innocent people with terror. The gospel of love is always a winner.

MRS MARY Shine is the widow of the famous John J. Shine who was sentenced to death in 1921 and who was placed in Limerick Prison pending his execution. Mrs Shine now lives in Lacey Close, Langley, which is in Maidstone, Kent. The signing of the Truce saved John J. Shine’s life and he was released in December of the same year. He died on Christmas Day of 1970. Ar dheis Dé go raibh a anam.

I had the honour of having a drink with John Shine and his wife a few years ago. What I did not know then was that he composed a poem in Limerick Jail while he awaited his execution. It is called Sweet Athea. His wife has very kindly sent me a copy.

I’m sitting in my cell dark and lonely

As the twilight through my window strays

And I’m thinking of a little hamlet only

So distant and so far away.

In a valley where the little brooks are tinkling

From the hillsides down so old and grey

And the sunbeams from old Ireland’s cares are sinking

And the shades of night upon your hills are creeping

While your homesteads all in peace repose

And the silvery moon into your valleys is peeping

To sparkle on your watery flows.

For peace is never found by those who wander

Or happiness by those who stray

And faithful to you sweet Athea.

I MET Jack Wilberforce Faulkner one day last week. He was coming from Athea where they were celebrating the Nominating of Mares Day. There were more than 60 mares in Athea and according to Jack they all passed. On the same day a mare and foal owned by an Athea man were sold for the unprecedented sum of four hundred pounds.

We went for a drink.

“Your mountain mare,” Jack explained, “is the best mare of all. She mightn’t have the good looks of the lady that came out of the good land but she’ll last longer and she’ll work better.”

In the bar a number of men were talking about the introduction of Belgian hares to south Cork and Kerry. Apparently the hares have bred successfully.

“What do you know about Belgian hares anyway?” One of the company turned aggressively towards Jack.

“Any hare will belge after drink,” said Jack. For a while Jack was asked no more questions. Word got out that his cottage was situated on land owned by the Knight of Glin.

“How would you salute a knight?” asked the man who had asked Jack what he know about Belgian hares. Jack decided to ignore him but the man, sensing that Jack was caught out, pressed his advantage.

“How do you salute a knight?” he asked in a louder tone.

A LETTER from Temple-glantine. Templeglantine was once described to me by Jerome Murphy of Glashnagcuac as one of the most religious districts in modern Ireland.

“They are the best spoken people I ever came across,” Jerome said, “and they never go in for swearing like more we could name.”

Anyway, to the letter.

“What is the betting who is going to be the new Baron of the 1972 Abbeyfeale festival? Through what street in the town will the PIPER himself be leading the victory parade?

“The present Baron, John Dillane, tells me that whoever the PIPER leads this year will not compete with his parade. He says not since Dev’s time did there a bigger cavalcade of cars come into Abbeyfeale for his last parade and if he ever got the chance of going for a TD he would sweep the countryside.

“Well John, my forecast will be hair’s breadth between Mossie Gorman from Tournafulla or Dan Keane from Moyvane. The Glantine Baron may be Aenas Foghran or Paddy Roche. Cheerio from Michael Murphy.”

The late, great John B Keane was a Leader columnist for more than 30 years. This column first appeared in our edition of April 1, 1972