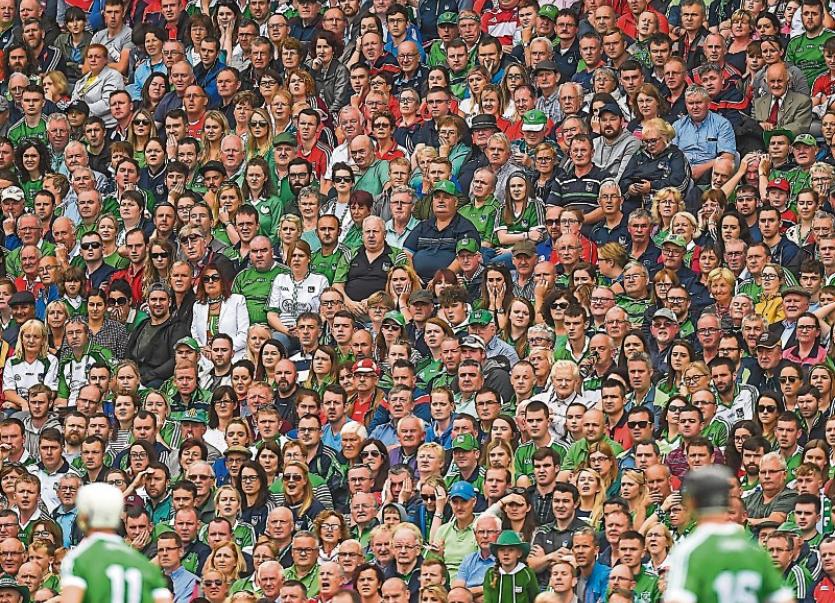 Some of the more than 30,000 Limerick fans who attended the All Ireland semi-final against Cork | Picture: Sportsfile

AN affordable hotel room in Dublin is proving as hard to come by as an All-Ireland hurling final ticket on the weekend of the big game as Limerick fans make plans for their trip to Croker.

This Tuesday, rooms in many city centre hotels were priced at between €200 and €400 on August 18, the night before the game.

When contacted on Tuesday afternoon the Red Cow Moran Hotel, owned by Athea native and former GAA sponsor Tom Moran, confirmed that all hotel rooms had been booked out for August 18 and 19, before the semi-final game even took place last Sunday.

Barry’s Hotel which many supporters pass on their way to Croke Park was advertising a single room with a twin bed for €254 with breakfast included.

Numerous bus companies are already advertising packages for transport to and from the match on August 19.

There will be no public sale of tickets for the All-Ireland Senior Hurling Championship Final.

While the capacity at GAA HQ is 82,006, it is expected that Limerick GAA will receive a ticket allocation in the region of 15,000, which will be distributed to all clubs.

Over 30,000 men, women and children from Limerick city and county made the trip to the capital on Sunday to  see their side overcome Cork in an enthralling extra time semi-final encounter.

Every county board and indeed GAA club across the country receives an allocation of tickets for an All-Ireland final with the competing counties receiving the most significant allocations. Almost 60,000 of the tickets will be distributed in this fashion with the two senior finalists accounting for about 25%. A further 10,000 tickets go to the premium and corporate levels.

“There is huge demand for tickets and it’s going to get even greater over the coming three weeks. Limerick fans will be trying every avenue to get their hands on a coveted ticket. With the county board getting in the region of 15,000, it would be a wise move for people to look outside Limerick to any contacts they have in other counties to see if they can help them out,” said a GAA official.

While Limerick have secured their place behind the Artane Band on August 19, their opponents won't be known until next Sunday when Galway and Clare replay their drawn semi-final.

The senior final will have a 3.30 throw-in and will be live on RTÉ Television and Sky Sports.