Machine Faugheen to make Cheltenham his own 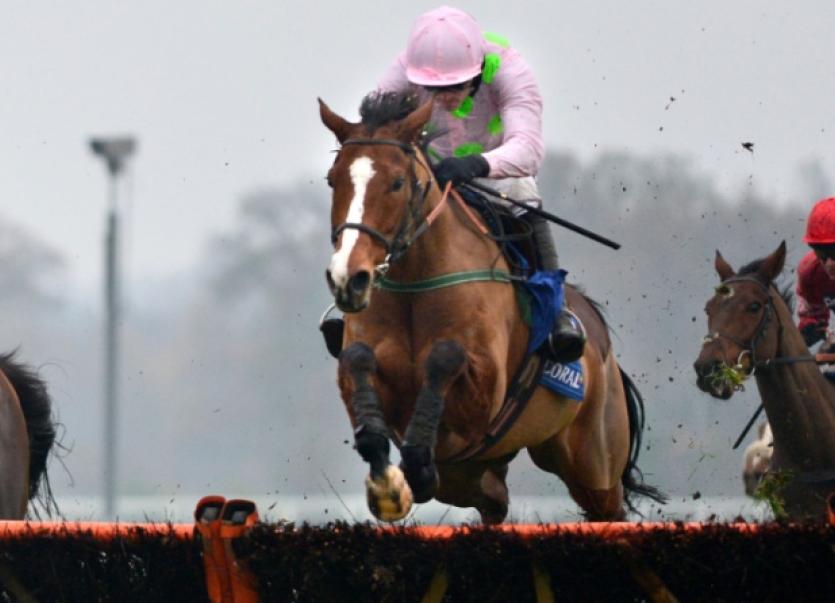 With the greatest show on turf nearly upon us, the Dunraven Arms Hotel annual Cheltenham preview night proved an ideal focal point for racing fans looking to crystallise their notions and theories about a winter’s jumping into hard fancies.

With the greatest show on turf nearly upon us, the Dunraven Arms Hotel annual Cheltenham preview night proved an ideal focal point for racing fans looking to crystallise their notions and theories about a winter’s jumping into hard fancies.

Served with a side of beef, dessert and wine, it’s surely the classiest affair on the burgeoning preview circuit, raising money, as it does, for the great cause that is the injured jockey’s fund.

As usual a top class panel was assembled to dispense its wisdom including trainers Philip Hobbs and Warren Greatrex, tipster extraordinaire Tom ‘Pricewise’ Segal, jockey Andrew McNamara, amateur jockey and pinhooker Katie Walsh and bookmaker Willie Power, all ably marshalled by Nick Luck. Or to give him his full title - Racing Broadcaster of the Year Nick Luck.

Having won that prize six times, we can now call him the Quevega of MCs. The only discomfort he suffered was a slagging about his blue tweed ensemble, shot through with red; which was fair enough as it looked like something that was meant to be a tartan suit, but bottled it half way through.

Our experts weren’t the only welcome presence on the night and there was a thunderous round of applause when JT McNamara and his wife Caroline, sitting at the top table with JP McManus, were introduced.

Some of the night’s most interesting contributions came from JP himself who while he believed that Jezki could get the better of The New One in the Champion Hurdle, didn’t seem too confident of beating Faugheen.

He was quite upbeat about the chances of Hargam in the Triumph Hurdle, however, one of three strong fancies from the Nicky Henderson stable that includes favourite Peace And Co.

Good ground is key to that one and JP was hoping a sound surface would help Carlingford Lough to victory in the Gold Cup on Friday.

When our MC hopefully queried his assessment of Mister Mole’s chances in the Champion Chase, JP replied, “He might be carrying your money Nick, but he won’t be carrying mine.”

Opinion on Wednesday’s feature was mostly coming down on the side of Champagne Fever though Greatrex liked Sprinter Sacre and Hobbs plumped for Sire De Grugy. Luck was on his own with Mr Mole and no-one gave Dodging Bullets a chance.

The Champion Hurdle, Tuesday’s feature, excited no such divergence, with the panel unanimous in going for Faugheen.

The New One’s errant jumping gave Walsh the impression that he had some sort of injury problem, and borrowing a turn of phrase from her dad Ted, she opined that while Faugheen was just “an average lepper”, he would still win.

The second championship hurdle of the week, Thursday’s World Hurdle gave rise to a wide range of opinions. Greatrex announced that his Cole Harden had had a wind operation and was in great order. Some good ground on Thursday would give him an each way chance.

Segal came out strongly for Saphir De Rheu calling him a really good horse waiting to happen and declaring him the bet of the meeting, no less.

Hobbs was very much in his corner there, but McNamara sided with the horse that Saphir De Rheu beat in January’s Cleeve Hurdle, Reve De Sivola.

Walsh took a couple of bites of the cherry here going for Whisper and Rock On Ruby each way and nearly took a third bite with a nod towards Cole Harden.

The Ryanair was nominated as Hidden Cyclone’s target by his jockey McNamara, much to Segal’s chagrin, having tipped it ante-post for the Champion Chase. Walsh thought John’s Spirit would win, Segal went with Ballynagour and Hobbs pointed out that his own Wishfull Thinking was second top rated and had a good each-way chance.

The centrepiece of the meeting and Friday’s feature, the Gold Cup was the last big race to come under discussion and JP McManus’ hopes for Carlingford Lough were echoed by Walsh and Segal. Both believed Silviniaco Conti would falter up the hill in the same fashion as last year when he jumped the last fence in front only to stagger around like a drunk thereafter and fade into fourth.

McNamara and Hobbs disagreed however, believing him a stronger horse this year who has the class to go on and win it.

Few other contenders like Lord Windermere, Road To Riches or Many Clouds were discussed, but Djakadam’s late surge in popularity was a talking point. Willie Mullins’ gelding didn’t find much favour with the panel who thought his Thyestes Chase win in January did not represent Gold Cup-winning form.

The novice chases were some of the most eagerly awaited of the night with Un De Sceaux understandably a unanimous choice in the Arkle. Walsh and McNamara agreed that the jockey would never be fully in control of a “rollercoaster ride” but the only way he’d lose was if he fell. Dunraven Storm and Smashing were offered up as each way alternatives.

In the JLT favourite Vautour was unpopular with Walsh and McNamara both believing he wasn’t carrying his head right, suggesting an underlying injury. Segal sided with that one’s stablemate Valseur Lido while the English trainers both went for Ptit Zig, despite his fall in his last start at Ascot.

Segal said the RSA would be the race of the meeting and labelled Don Poli the star of the future. He was backed up by Greatrex and Walsh, but opposed by McNamara with King’s Palace and Hobbs with Coneygree.

The novice hurdles were the first items up for discussion on the night and Ireland again goes in with a hot favourite in the shape of Douvan, who according to Walsh and McNamara is a cert. Segal went for Qewy, Hobbs for Jollyallan and Greatrex for his own representative, Seedling.

Outlander was the choice of Walsh and McNamara in the Neptune Hurdle with the former deriding favourite Nicholls Canyon as a bit of a pony. Segal went for Windsor Park and Hobbs chose Parlour Games.

The Albert Bartlett didn’t get a mention, but the Triumph did with Hargam and Top Notch chosen by Greatrex, Top Notch and Petite Parisienne by Segal, Beltor by Walsh, Dicosimo by McNamara and Hargam by Hobbs.

Sam Twiston Davies was also on the phone and as well as diplomatically standing up for The New One, he put up Sire Collonges as Paul Nicholls’ best handicap bet of the week.

Handicaps got a swift mention at the end, with Segal putting up Hostile Fire in the Fred Winter, The Druid’s Nephew in Tuesday’s 3m chase and Brother Brian in the Pertemps.

Greatrex gave a strong word for Paint The Clouds in the Foxhunters and Hobbs was very keen on his Bumper horse, Wait For Me.

And that was that. The usual enjoyable night had the crowd buzzing in anticipation of next week’s theatre of turf, so bring on the dancing horses.

Philip Hobbs: Wait For Me