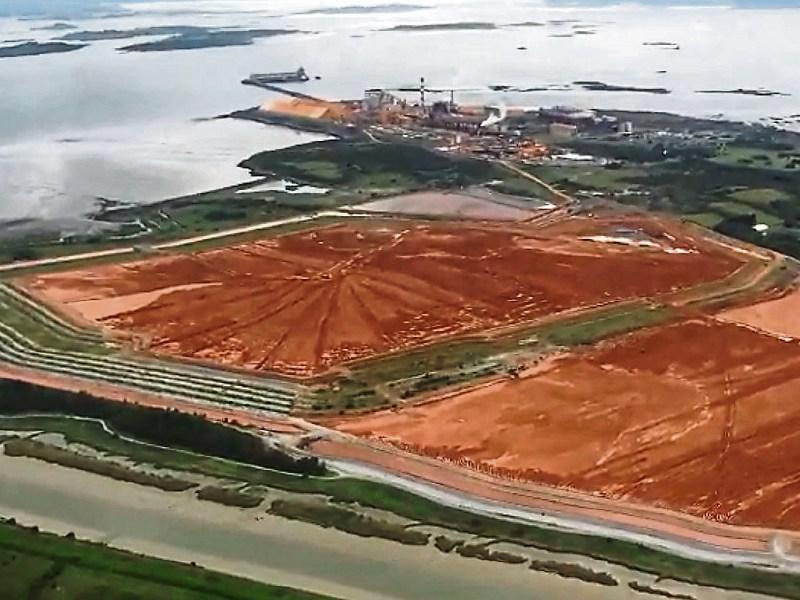 AUGHINISH Alumina has received approval from An Bord Pleanála to expand the capacity for two of its by-products, bauxite residue and salt cake, by raising the heights they are stored at.

The company, which operates Europe’s largest alumina refinery near Askeaton, lodged a formal application late last year and details of the decision have just been confirmed.

There were a number of objections to the application and members of the Adare/Rathkeale Municipal District also submitted a detailed submission as part of the planning process.

More details given on Aughinish plans for expansion at Limerick facility

Bauxite residue is a non-hazardous red-coloured material and is currently banked, to a maximum height of 32m in an open, 184 hectare site, known as the Bauxite Residue Disposal Area (BRDA) or red mud pond.

The company has now been granted permission to raise the height by 12 metres to a maximum 44 metres.

Salt cake, is a hazardous material stored in a separate, lined cell within the BRDA and approval has been granted to increase the height of this stored material from the current maximum of 29 metres to a new maximum of 35 metres.

In a detailed report, prepared for An Bord Pleanála, senior planning inspector Paul Caprani, said he was satisfied the proposed development "would not have an unacceptable or significant adverse impact on the receiving environment" and that it is "in accordance with the proper planning and sustainable development of the area."

The expansion will provide for the deposition of around one million cubic metres of bauxite per annum.

In a submission submitted on behalf of the Cappagh Farmers Support Group, Pat Geoghegan objected to the BRDA expansion stating “it will exacerbate the potential for an environmental disaster and it would put huge pressure on the existing embankment walls”.

The group warned that if an environmental disaster occurs at the location as a result of a grant of permission, the Board "will have nowhere to hide."

Environmental Trust Ireland, which also objected, contended that the proposal “is an environmental catastrophe waiting to happen".

However, in recommending planning permission, Mr Caprani concluded that the third party observations did not provide "any substantive evidence that the BRDA is structurally deficient to the extent that any such breakout of bauxite residue is likely or imminent”.

He said that evidence presented before the Board “overwhelmingly suggests that any such breakout ranges from ‘very unlikely’ to ‘negligible’”.

In response to some of the objections and observations, planning consultants for Aughinish Alumina, Tom Phillips and Associates stated that “any suggestion that the existing facility at Aughinish will exacerbate threats to the environment and to human and animal health is not supported by evidence”.

In its planning application to An Bord Pleanála, Aughinish said the Limerick plant would, otherwise, have to cease operations in 2030 “based on current production levels” of 1.9m tonnes of alumina a year.

Aughinish Alumina, which has operated since 1983, currently employs 482 people with an additional 385 downstream, maintenance and contract jobs.

“The closure of the facility at Aughinish would result in a significant loss in highly-skilled employment opportunities in the wider area and result in the loss of one of the state’s major industrial manufacturing facilities,” the company said in its planning application.

In granting permission for the expansion, An Bord Pleanála, imposed a number of conditions that must be complied with.