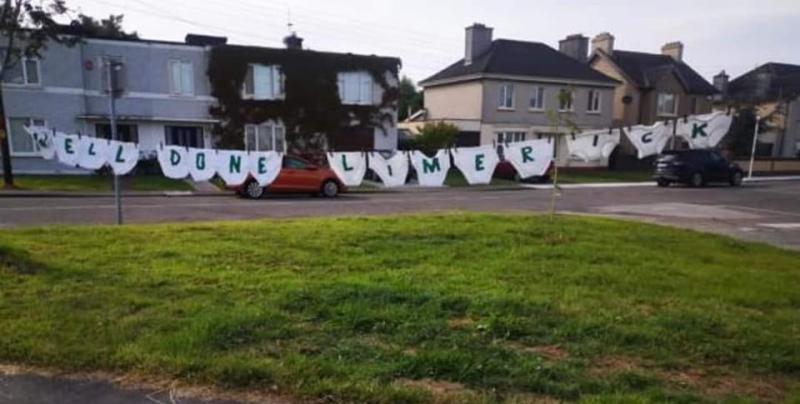 AN APPEAL has been issued for the safe return of a set of undies which were 'knicked' from a washing line in Limerick city.

Denise Houlihan and her neighbours in the Irish Estates were distressed to wake up to the pilfering of the panties, which had the letters L-I-M-E-R-I-C-K sewn into them.

Until the weekend, when a brief bandit visited the community, sparking upset, given the fact the pants had huge sentimental value.

In an call-out on social media, Denise wrote: "Please return our magic knickers! They are WAY TOO BIG for you."

The unique pants represent huge sentimental value to the community after they were hand-sewn by their dearly departed friend Sinead Dinneen.

Having been featured in the local and national media, Denise believes they have brought luck to Limerick's hurlers - and are one of the final links the community has with Sinead and her creativity.

"We feel they were taken in a late night prank and if the people who took them see this, or you come across them in your house or even dumped somewhere, please consider returning them to the triangle with no repercussions. We are not interested in a blame game. We would just love to have them back," she added.

"You can leave them back at the triangle / green at dark. Or post them to 31 Abbey Avenue, Irish Estates," she concluded.

The briefs were first put on the washing line in 2018 when Limerick ended a 45-year wait to win hurling's holy grail.

Pat Hartigan, who lives in the estate and who was on the 1973 winning side gave the granny pants his own blessing.

Denise has said previously that neighbours - jokingly - believe the granny pants are a secret weapon for Limerick, as the Treaty men have won Liam MacCarthy each year they are hung up.

In 2019, the pants were not on show - and Limerick exited the All-Ireland series at the semi-final stage to Kilkenny, who of course they got sweet revenge on at Croke Park last month!