Horsing around! One of Limerick's youngest hurling fans cheers on the boys in green 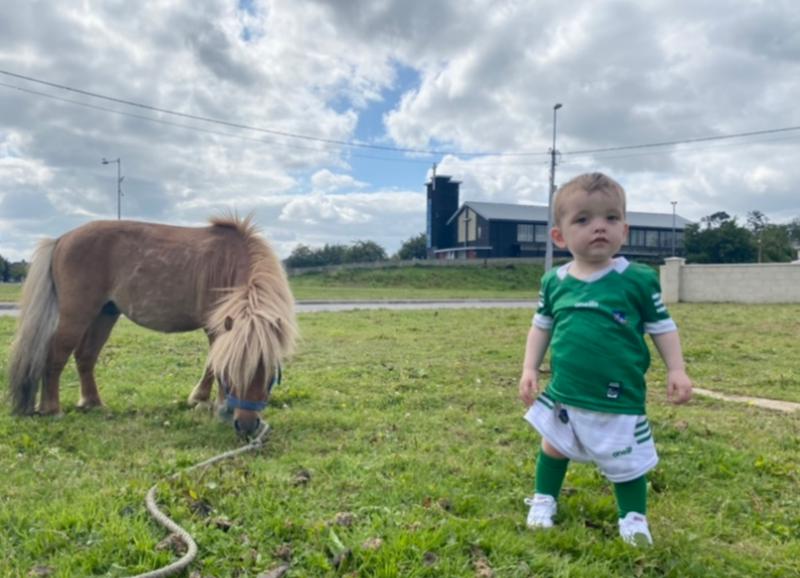 HE MAY be small in stature but one young hurling fan has big love for the Limerick team.

One-year-old Keegan Collins-O’Donoghue is pictured near his home at Rosbrien kitted out in his Limerick jersey ahead of the All-Ireland Senior Hurling final between Limerick and Kilkenny on Sunday afternoon.

Anthony O’Donoghue, Keegan’s father, says he and the entire family will be cheering on the boys in green on the day down in their local pub.

“Keegan and his brother Tyler will be watching with us, his grandparents and the rest of the family down in the local. There’s too many of us to go to the match so this is the next best thing,” Anthony said of his upcoming family outing.

“He’s only one but he always watches the matches with us. He has no choice,” Anthony told Limerick Live.

“If they win it’ll only be two in-a-row for Keegan but it would mean so much for all of us if the lads take home the win,” he added.

As for the prospects of an historic three in-a-row on the pitch on Sunday, Anthony says he's quietly confident.

“I think they’ll do it for definite, they’ve been lacklustre in a couple of games but they’ve always come back. I think they’ll win even with Cian Lynch missing,” he said.

Hurling has been a massive part of Anthony and Keegan’s family for years: “We’ve always watched the games. It’ll mean so much to all of us if they win, especially my father Anthony and mother Sandra,” he said.