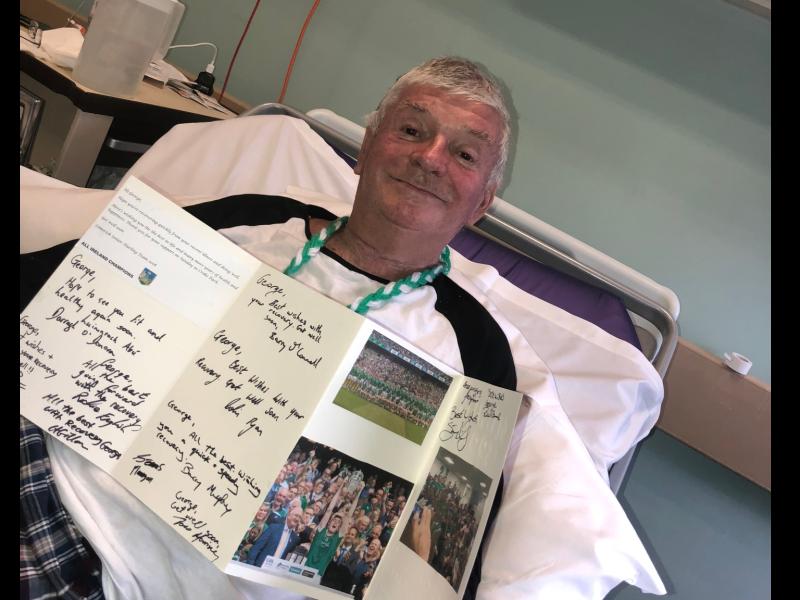 LIMERICK hurling fan Gerry Barnby was at the 2018 All-Ireland final but sadly doesn’t remember a thing.

He will savour more than most being back in Croke Park this Sunday to see his native county take on Galway once again. Gerry, originally from Kileely, had a heart attack on the Luas after attending the game four years ago.

The 71-year-old was saved by a quick-thinking Galway nurse, Claire Dolphin. She modestly told the Leader back then, “I did what anybody would have done”.

Ger O’Connell, the Limerick team’s kitman, organised for players to send a signed sliothar and a get well soon card with personal messages to Gerry in the Mater Hospital.

Chloe, a daughter of Gerry’s, said he was sent in to resus the first night.

“We were told ‘get the family, it is not looking good’. The next day he was sitting up reading the newspaper. He doesn’t remember anything of that day. He came up on the train from Kildare early that morning in to me. I live 10 minutes from Croke Park. He got some Limerick bits and we went to the match,” said Chloe.

“From what we were told he just slouched over onto the person he was sitting next to and they had to stop the Luas. Claire saved him basically,” said Chloe.

“He’s golfing all the time. He’s a lot more health conscious. It was his 75th birthday on Friday (July 1) and I got him tickets to the match so he’s delighted. His family moved from Kileely to Kildare when he was 10 but he is still a Limerick man through and through. If you say anything about being from Kildare he goes mad!” laughs Chloe.

She thanks Claire again from the bottom of her heart for saving her father’s life and all who came to his aid on the Luas. And the Limerick hurlers for their kindness.

“He is so thankful to Claire and the hurlers. He has the card and the article in the Leader framed and the sliothar in a special glass case. He thought the world of them for doing that. They are his prize possessions,” said Chloe.