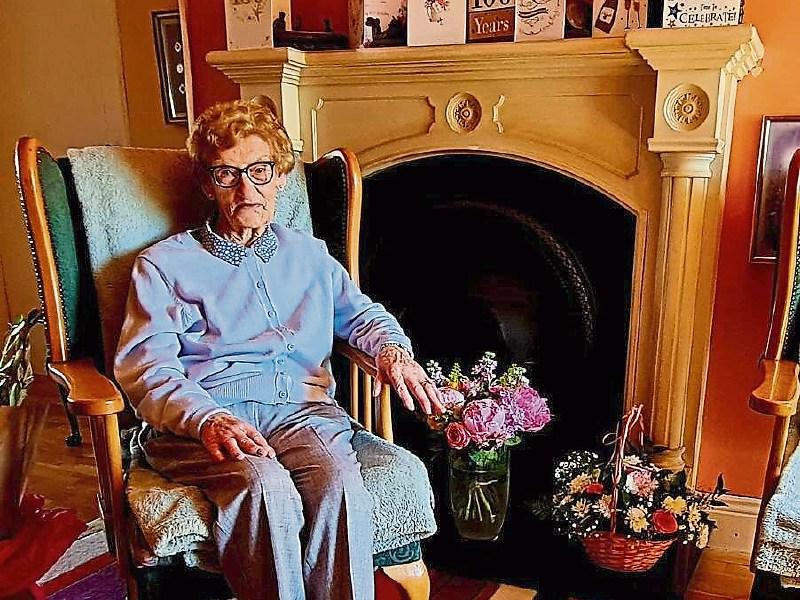 Adare's oldest resident Dolly O'Neill at her home, on her 100th birthday

ADARE’S oldest resident was enjoying the limelight as the local community came together for a special tea party to celebrate her 100th year living within the village.

Dolly O’Neill was born to a family of five in Curraghbridge, Adare in 1922 and is the last surviving member, having also lost her husband Michael O’Neill at the age of 65.

She worked in the Dunraven Arms Hotel as a young woman, living in the quarters there before moving to contract catering duties at Adare Manor.

“She had great fun there, I always think she was a bit on the wild side, even if she says that she wasn’t,” her niece and full-time carer Betty Hennessy told Limerick Live.

Throughout her life, Dolly was a member of every organisation in Adare: the Irish Red Cross, Tidy Towns and the Active Retirement Group.

“She has always been a busy woman, her social life has always kept her young,” Betty added.

While no longer able to participate in the organisations, Dolly loves when visitors bring all the local news to her on their visits.

“She loves the limelight,” Betty joked, recalling her aunt’s appearance at the 2022 Adare Parade as Grand Marshal, where she was waved at by thousands of attendees on the day.

At least 50 people attended Dolly’s 100th birthday on Monday, June 20, followed by a special tea party last Sunday, June 26, in the village hall where all the local organisations celebrated her milestone birthday.

“There was a queue to get her photograph. She loved it as she saw people she hadn’t seen in a very long time. The community really made her proud, they love her,” Betty added.

The key for Dolly, Betty said, is her ability to never dwell on the past. She has had several setbacks, such as a stroke three years ago and two pacemakers but always looks forward to the future.

Betty said: “Being active, eating healthily and having lots of friends is the secret to her longevity. She was on her own, with no children and her husband died when she was young.”

While an avid sports fan, Dolly won’t be attending the JP McManus Pro-Am next week.

“However, she will be keeping close tabs on Tiger and company as she can see the golf course from the grounds of her residence, located at the old entrance to the Manor,” Betty concluded.