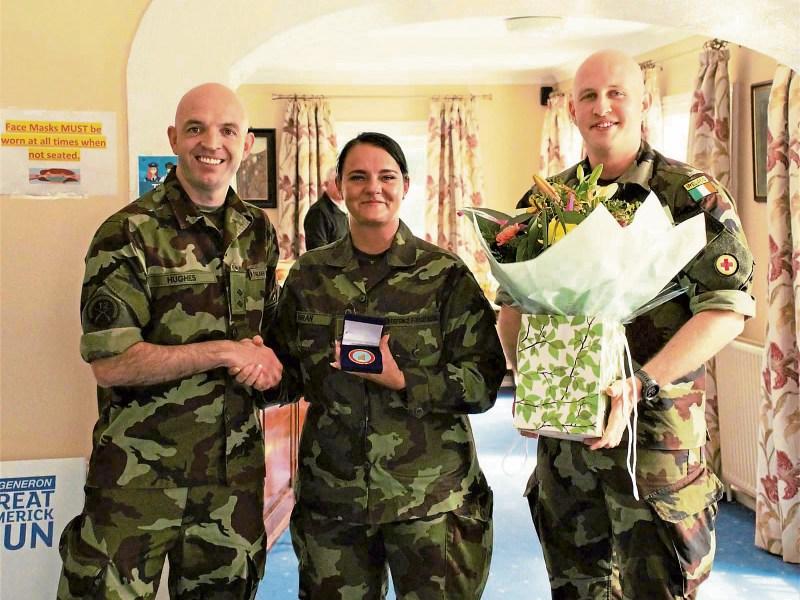 MARCHING for the Maternities delivered way more than expected.

Two Limerick-based soldiers and their partners came up with the idea of completing the half marathon in the Great Limerick Run with 30lbs on their backs.

They were backed up by over 60 supporters - family, friends, soldiers, neonatal staff in Limerick.

The fundraising page is now closed at just over €36,000. “There are still some offline donations coming in so that figure will rise. This amount will be split between the University Maternity Hospital Limerick and the Coombe,” said Lt Hughes.

He and Sgt O’Brien were also backed by the 119th Infantry Battalion who were in Lebanon at the time. Troops attended Sarsfield Barracks last week with €2,700 they raised from their tour of duty.

“They raised funds from charity boxing, race nights and by over 200 personnel completing the Marching for the Maternities event on the same day carrying the same weight as the troops in Limerick,” said Lt Hughes.

Lt Hughes said they had two main aims – raise as much money as possible for both hospitals and “raise awareness of the incredible work that the staff of both hospitals do”.

Big thanks to McKee Officers Mess who held a coffee morning recently. Pictured are Lt Hughes collecting a cheque from Capt Piper today for €1000, which will be added to the funds.

Fundraising pages are closed, but this donation brings the total to over €36,000 @12infbn #nicu pic.twitter.com/4BGaNwz8S7

— Marching for the Maternities (@marchordonate) June 2, 2022

“Their kindness, care, compassion and genuine connection they develop with every child they care for is amazing. The staff in both hospitals do this work without expectation of any thanks or reward in return. We felt it was important to recognise them and show people just how inspiring they are.

“Max and Daisy are both doing very well. We cannot thank the staff enough for the care they received, which allowed us to bring our little warriors home,” said Lt Hughes.

The event started small but the support of the Defence Forces community allowed it to grow and develop into something “amazing”.

“We are genuinely touched by the level of involvement and engagement from members of the Defence Forces, veterans and their families,” concluded Lt Hughes.