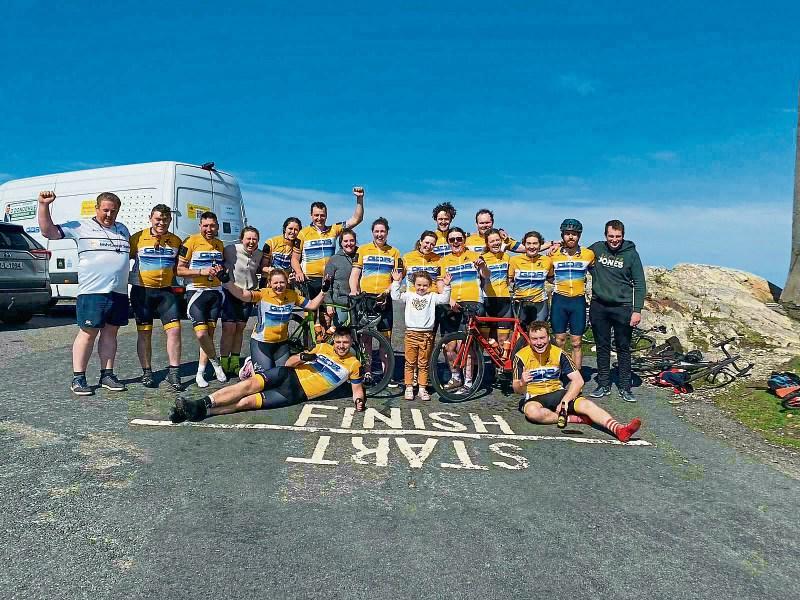 A happy, relieved and tired group of Macra members at the finish line at Malin Head in Donegal

OVER 20 Macra members from Limerick and neighbouring counties cycled the length of the country in five days – with two completing it in just 72 hours!

Croom farmer Hannah Quinn-Mulligan said the challenge had been a huge achievement for the group.

“I'm not sure many of us knew what we were undertaking when we signed up,” said Hannah.

“But I feel enormously proud of what we've all achieved. It was a massive test of physical and mental strength. The cycle held an emotional element for many of us, as we've all been affected in some way by the issues represented by each charity.

“There were plenty of falls, near misses and even a few tears along the way but the group always pulled together and I'm incredibly proud to have been a part of it.”

Hannah singled out Daragh Fanning, Pallasgreen and Fiachra Hogan, Cappamore who completed the challenge in just three days compared to their five. But Daragh was quick to turn the tables around.

“We do triathlons so we could be out cycling three or four nights a week. It was harder for them as some had very little experience on bikes. It was a far greater achievement for them to complete it than us. We were only punishing ourselves for three days, they were punishing themselves for five!” said Daragh, who bought a bike during lockdown when GAA was cancelled and the cycling led to running and swimming. The former All-Ireland winning U-21 Limerick hurler said they all put their bodies on the line for three brilliant charities.

Between online and company donations the group has raised almost €40,000. You can still donate on the Munster Macra Mizen to Malin Challenge 2022 Go Fund Me.

Daragh said they met up with the other cyclists 14kms from Malin and they cycled as one to their final destination.

“Macra is like a little family,” said Daragh, who praised Elaine as the amount of work that goes into organising events like this is “phenomenal”.

Elaine said cancer and mental health are issues that impact every farm family across Ireland. “It’s vital to support each other and raise awareness,” she said.