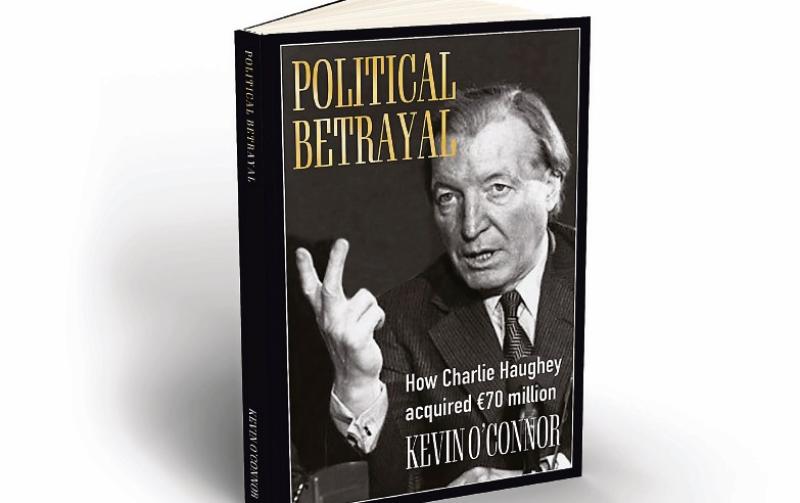 And there is quiet satisfaction in the fact that veteran broadcaster Seán Duignan has described it as “the most explosive book to come out of Ireland in the last 25 years.”

But Kevin, who was born in Glentworth St, sang with the Cecilians and played rugby for Old Crescent, is no stranger to controversy. As a reporter, first with the Irish Press, then as news editor and parliamentary correspondent with the Sunday Independent, he cut his teeth on the political conflicts and scandals of the day.

And in 1999, the country was agog following his exposé of former Taoiseach Charles J Haughey’s long-running affair with Terry Keane, in his book Sweetie. Terry, Kevin says, went on the Late Late Show and revealed the affair only “because my book was coming out the following month.”.

His new book, he explains, is a continuation of his investigation of Haughey’s life and times, a man whom he describes as a flawed genius.

“I have been constantly asked how I would assess Haughey,” Kevin has said in the past. “My answer is that he was someone with enormous talent, manipulative, cunning, devious, astute, extremely generous and caring, someone who had the capacity to brainstorm an idea from every aspect and deliver a finished product.”

In the new book, he claims that Haughey, during the 1970s, was in direct contact with the leaders of the Provisional IRA. And his source, he says, is an official memorandum from the Special Branch. He also claims that as Minister for Finance, and as the Arms Crisis was unfolding in 1970, Haughey ordered the tapping of the phone of then Taoiseach, Jack Lynch.

Kevin also describes how the late Des O’Malley saved Haughey’s political career following a disputed account of how Haughey acquired some serious injuries. The official version was Haughey had fallen from his horse but according to Kevin, Haughey was beaten up by the father and son of a girl he had been having a dalliance with.

Kevin is hoping that, unlike Sweetie, that Political Betrayal will make it on to the screen. “I will be sending out feelers. I have somebody making enquiries about that,” he says.

“There are tremendous scenes,” he goes on, citing the incident when Haughey confronted TD Liam Lawlor when Lawlor was thinking of joining the Progressive Democrats, It was, Kevin says, “like something out of The Sopranos”.

But, while he charts his acquisition of money, Kevin emphasises he is fair to Haughey and gives him full credit for his last achievements, among which he includes the Financial Services Centre in Dublin, Temple Bar, free travel for elderly and support for Knock Airport.

He also argues Ireland has a world class equestrian industry because of his tax exemption and says he was the first Taoiseach to take arts, culture and the environment seriously.

Now, he continues: “I am working on something else which has come to me as a result of the publication of this book, something absolutely sensational,” he says. “If you get a story, you have to find out whether it is true or not.”

Signed copies of Political Betrayal: How Charles Haughey Acquired €70 million are available in O’Mahony’s Bookshop, Limerick for €18.90 and €24.90