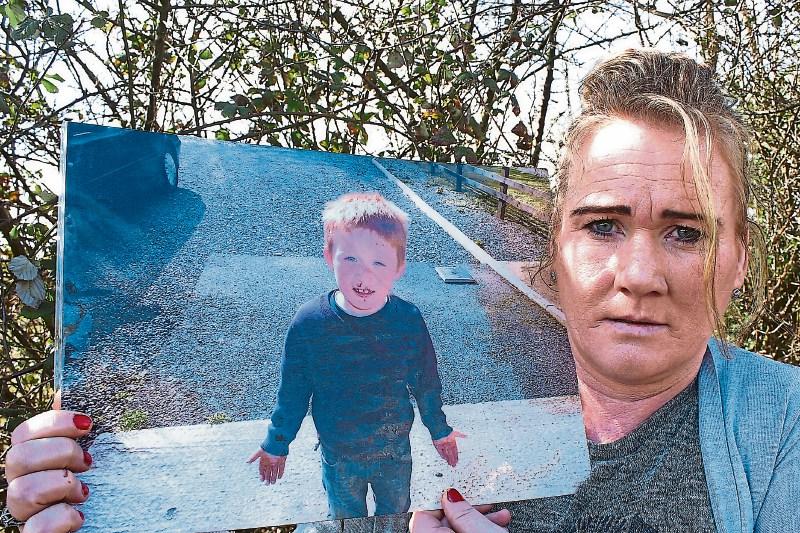 A LIMERICK mum whose young son was killed in a road traffic accident has been contacted by mothers worried more children will die on the same stretch of road.

Eileen Fitzgerald, the mother of six-year-old Anthony who died outside her former home in Ros Fearna, Murroe in 2012, said she hasn’t celebrated a Christmas since.

Ms Fitzgerald has made a New Year’s appeal so other mothers don’t “suffer the mental torture” she has.

Back in 2016, Ms Fitzgerald and former councillor, Lisa Marie Sheehy were behind a campaign to get ramps erected. However, the council said it would set a “precedent”.

In 2018, Ms Fitzgerald reiterated her appeal. She moved from her home because she feared a similar incident would happen again.

In recent weeks she has been contacted by mothers in Murroe to raise the issue again. The speeds people were driving outside the large estate were already “way too fast” but it has been magnified by resurfacing works, said Eileen.

“They tarmacked it so now the speed is even worse up and down it. Now the road is as smooth as anything, it is like a race track.

“I was on the phone to a girl a couple of weeks ago and she was crying on the phone to me. She is afraid of her children crossing the road every morning. They are very worried,” said Eileen.

She estimates there could be 20 or 30 children in Ros Fearna that have to cross the road every morning to walk to school and get buses and in the “dark evenings” coming home later that day.

“I know I am not going to bring Anthony back but I am going to try and help them with their little kids so that there won't be another fatal accident.

“I don’t want another mother and family to suffer the mental torture we went through after my Anthony got killed on that road. He was the youngest of six kids. He was the baby. Anthony would be 16 now. He will be 10 years dead in April. I moved from Murroe because I couldn't take the pressure of it anymore,” said Eileen.

Despite moving away she is very familiar with the road as she and her family visit a memorial plaque to Anthony where he was killed, every few days.

“I was out there before Christmas. I was cleaning up my little boy’s plaque and honest to God I nearly got blown into the ditch two or three times due to the speed of the cars,” she said.

“I couldn't believe it knowing that two people had been killed on that road. I can see it happening again. I have seen so many near misses.

“It is frightening to see it,” said Eileen, who called for ramps to be erected on the road outside Ros Fearna, Murroe to slow traffic or “even a zebra crossing would help”.