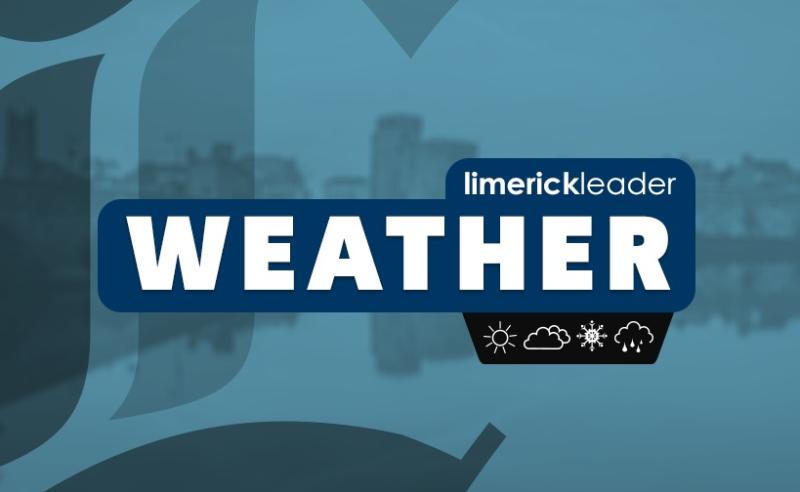 Today in Limerick will start with rain, turning heavy at times. The most persistent rain will clear to the east by afternoon with drier intervals developing for a time, though scattered patches of light rain will linger.

A further spell of rain will spread from the southwest in the evening. Feeling slightly milder with highest temperatures of 10 to 12 degrees in moderate to fresh south to southeast winds.

Overview: Low pressure will dominate our weather in the lead up to Christmas, bringing wet and breezy spells. Turning milder for a time also.

Tonight: cloudy and wet night with outbreaks of rain spreading across the country from the southwest again, turning heavy at times. A clearance will move into the southwest by morning. Lowest temperatures of 6 to 9 degrees, becoming milder overnight as the rain spreads. Moderate to fresh southerly winds.

Thursday: Rain will clear to the north through Thursday morning, leaving a bright and dry day for most with sunny spells and scattered showers. Relatively mild with highest temperatures of 9 to 12 degrees in moderate southwesterly winds.

Thursday night: Turning cloudy again on Thursday night with outbreaks of rain gradually spreading from the southwest. Lowest temperatures of 5 to 9 degrees in moderate to fresh southeasterly winds.

Friday (Christmas Eve): A wet start in many areas on Christmas Eve with continued outbreaks of rain. That rain will clear to the north through the day with some drier spells developing, though scattered patches of light rain and drizzle will linger. Highest temperatures of 8 to 11 degrees in mostly moderate southeasterly winds.

There remains some uncertainty in the forecast for Christmas weekend. Current indications suggest that more rain will spread across the country from the southwest on Friday night.

However, with Rudolph's help, Santa will have no problem making his way through the rain.

Christmas Day looks likely to be cloudy with spells of rain continuing for most and highest temperatures of 7 to 10 degrees.

Further outlook: Remaining generally unsettled into the final week of 2021 with further spells of rain and some breezy days too. Temperatures turning slightly cooler again.