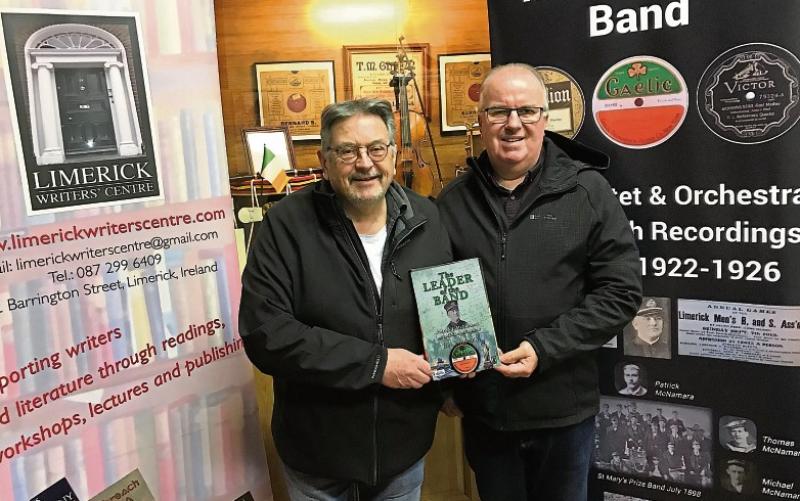 “OH, my name is McNamara, I'm the leader of the band”, the first line of a famous song depicting the jovial antics of an Irish American band in the early part of the 20th century in New York.

Now a new book written by Dr Derek Mulcahy and published by the Limerick Writers’ Centre called The Leader of the Band, depicts the life and history of Limerick man Patrick J. McNamara along with his brothers Michael, John and Thomas who formed the original McNamara’s band and emigrated from Limerick in early 1900s.

The book, which was launched at St Mary's Cathedral by Irish recordings archivist and collector Alan Morrisroe comes with two CDs of music of McNamara’s Band New York recordings from 1921 to 1927.

Derek Mulcahy, the author of The Leader of the Band, is no stranger to the music of Patrick J. McNamara. He is the current bandmaster of St. Mary's Band Fife and Drum Band, a role that Patrick J. McNamara held with distinction in the 1890s before emigrating from Limerick to New York.

A graduate of Mary Immaculate College, Derek completed his PhD thesis on the ‘Evolution of Limericks fife and drum tradition from the 1830s to the 1930s’ in 2017.

He is also an accomplished flute, fife and whistle player, he has recorded and toured with a variety of groups in Europe and the USA and teaches the flute and whistle locally since the 1990’s. “Writing and compiling this book has been a labour of love for me” said Derek.

“It took the best part of three years of work to gather all the information together to present a complete picture and depict the importance of the McNamara’s, and especially Patrick J. McNamara, to the musical life of Limerick and subsequently New York.” he said.

A unique aspect of the publication is the inclusion of two CDs with 44 recordings of Patrick J. McNamara and his various bands, recorded in New York.

The early 20th century saw great advances in the recording of music and was an important aspect of the success of bands like McNamara’s band. Thanks to the expertise of Alan Morrisroe a collector and archivist of old Irish 78 rpm records the tracks have been compiled and remastered to their original speeds.

The Leader of the Band is available directly from the author, in St Mary’s Band Hall any Sunday from 12 to 1pm, online and various bookshops.