On the picket line:  New book highlights experiences of ex-Debenhams staff who protested for 406 days 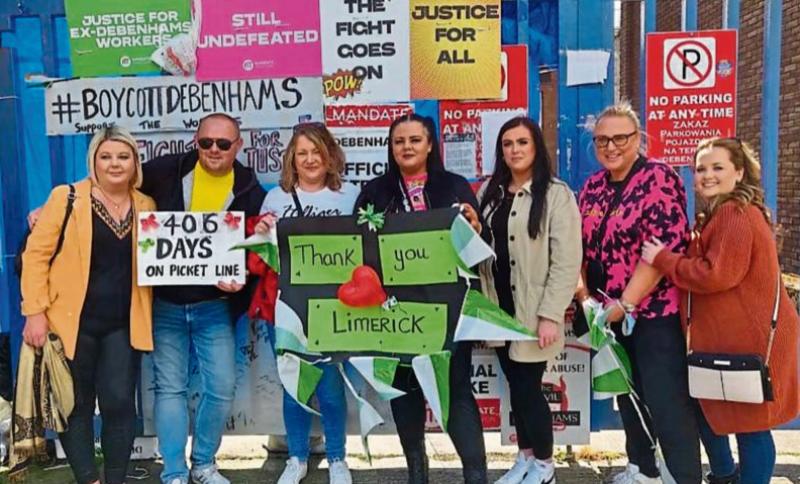 Paul Quinn and some of his colleagues, thank the Limerick public for their support towards the end of the Debenhams protest

THROUGHOUT last year and  much of this, local shoppers became accustomed to a familiar sight outside the former Debenhams building in O’Connell Street.

For 406 long days, through rain, hail snow and occasionally sunshine, a core group of former retail workers provided a round-the-clock picket on the landmark unit, in particular its rear delivery bay at Honan’s Quay.

They had been left shocked when in the early stages of the pandemic in April 2020, Debenhams pulled support for its Irish operation, in doing so, leaving 110 staff in Limerick without a job.

With the British retailer’s parent firm also in trouble – now liquidated after 243 years – redundancy settlements were impossible to access.

And so, staff members played what they felt was their final card – blocking access to Debenhams still-lucrative stock – when staff employed by the Irish liquidator came calling. 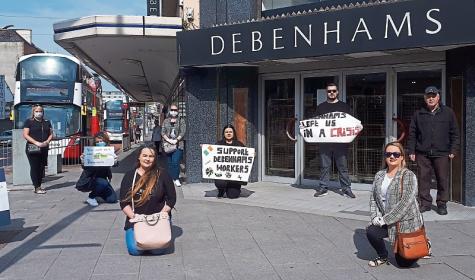 Now writers Fergus Dowd and Sue O’Connell have gone behind the protest lines to put together a book which gets to know some of the redundant workers in Limerick and nationwide, charting some of the emotional and financial pressures of losing a job in the middle of a global pandemic.

Despite the Debenhams action being one of the longest strikes in Irish history, it understandably did not garner the same amount of attention as it would in normal times, column inches instead taken up with he unfolding health crisis.

It’s for this reason Fergus felt it needed to be documented.

“I just felt someone should be telling their story. Originally, this was meant to be an archival documentation project for a working class museum in England. Workers were then asking us if we could put this into a book. It’s one thing to take five or six stories, but Sue looked at the history of Debenhams and found out it began before the French revolution. We had enough material to look into the history of the company which is pretty incredible,” he said.

One of the first former workers Fergus got to know from Limerick was Ballynanty man Paul Quinn, alongside Mike McNamara, made redundant as he hit his early 60s.

“I remember when I sat down with Paul first. He was a guy who had come back from Edinburgh because his mam was sick. He had this whole thing going on at home looking after two elderly parents, but he had to go out. I don’t think he ever missed a day on the picket,” he said, “It’s two parts of a spectrum. His father [John] was a former mayor of Limerick, then you have a guy sitting in a hut for 406 days.”

“He was telling me his brother Neil Quinn had introduced Dolores O’Riordan to the Cranberries,” Fergus added.

Mentioning the Cranberries today for local people stirs up glorious images of the Limerick hurlers in Croke Park.

Back in December last year, Limerick defeated Waterford to win their second All-Ireland title in three years in a deserted Croke Park.

It was a rare chink of light in what had been a very tough few months for Paul and his colleagues.

A window dresser by trade, he had used his talent to decorate his hut up in the distinctive green-and-white of the Treatymen.

It was something to do for Paul, who for the last decade had been responsible for putting together the Debenhams Christmas window display in Limerick. 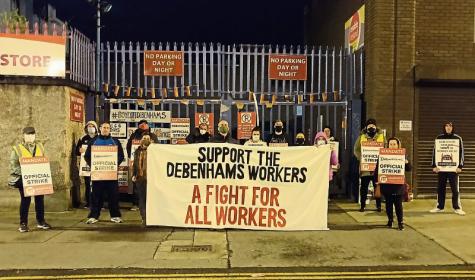 He was delighted when the team’s captain Declan Hannon made mention of the many Limerick people who had lost their jobs during the course of Covid-19.

Fergus said: “I just thought, you have this huge celebration going on, it was a great achievement to win an All-Ireland, then you have this guy whose father is a former mayor, he’s sitting in a hut.”

There is a sense among some of the workers which remains today, how none of it makes sense.

“None of it made sense what people were being offered. Last December, they were offered a training fund. But what is good to that of someone who is 63? Just the way Debenhams was allowed to just disappear really,” the writer adds.

Amazingly, due to the restrictions brought about by the Covid-19 pandemic, Fergus never actually met any of the Debenhams strikers face-to-face, carrying out his interviews virtually.

Workers still await their redundancy payments, and abandoned their action after one final showdown where they blocked the access of two lorries in May last. as their drivers sought to recover stock.

“It’s horrific these people didn’t get what they deserve. But at least their story is documented now as well and people will know what happened. They are inspirational people, so determined. It was an absolute pleasure [meeting them],” Fergus added, “Just their determination. I don’t know if I could stand in a loading bay for six hours a day. Some of the women sat there 12 hours.”

It was a difficult piece to write, he admits, saying: “You sometimes have to wonder if this is really happening. These people are out in a pandemic sitting in loading days freezing cold, and standing in front of trucks, dealing with security, gardai, the whole thing. It’s not 1919, it’s 2021. There is just disbelief, and sadness,” the writer concluded.

Tales from the Debenhams Picket Line is available now in Easons.