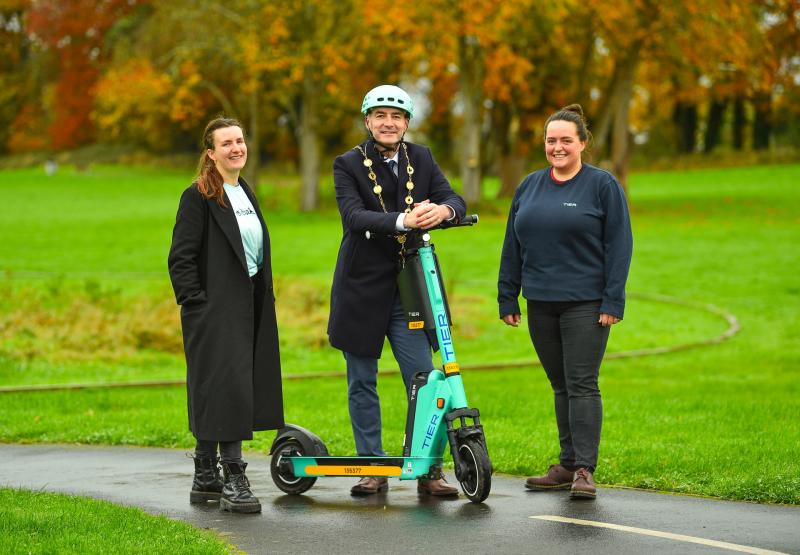 EUROPE'S largest provider of rental e-scooters and e-bikes have said they are hoping to bring their vehicles to Limerick.

TIER visited Limerick to show their latest model of e-scooter to officials and councillors following news that they are taking over Belfast's Bike Share Scheme.

TIER now operates in over 400 cities across Europe and they are aiming to add Limerick to that list.

E-scooters are currently not allowed to be driven on Irish roads however legislation is expected to be brought in to change this.

Mayor of Limerick Daniel Butler said that before the scooters are brought in he would like to see clear guidance on their safe usage to protect pedestrians.

'We are awaiting legislation from the government in relation to e-scooters that will set up governance in relation to the use of them in our urban settings.

"Once that is published we will be in an ideal position as a compact and flat city to utilise all active travel modes including e-scooters.'

"Once that legislation is published the next stage will be a tendering process to which Tier and other suppliers can bid on.

"I have used their service previously in Warsaw by chance and found it a great way to get around a large city in a short space of time while still being able to interact meaningfully with your surroundings."

Speaking on TIER's ambition to extend to Limerick, Georgia Heathman, TIER Public Policy Manager for Ireland said: "It isn't about just bringing e-bikes or e-scooters to Limerick, but about doing it correctly: we want to make sure the bikes or scooters are positioned where people will use them, that they're parked safely, and that pedestrians and other road users feel safe too.

"We have great ambitions to bring e-bikes and e-scooters to Limerick, but we want to make sure it's done right".

Heathman continued: "One of the things we've been working hard on behind the scenes is working with a wide variety of stakeholders including NCBI, Disability Federation Ireland, Irish Wheelchair Association, Age Friendly Ireland and Walk21 - all as part of our Safety Board - to make sure that we are working to the highest possible standards and being the most responsible operator in Europe.

"We think it's a big part of our appeal in the cities we serve to date, and we are ambitious to bring that approach to the streets of Limerick soon".