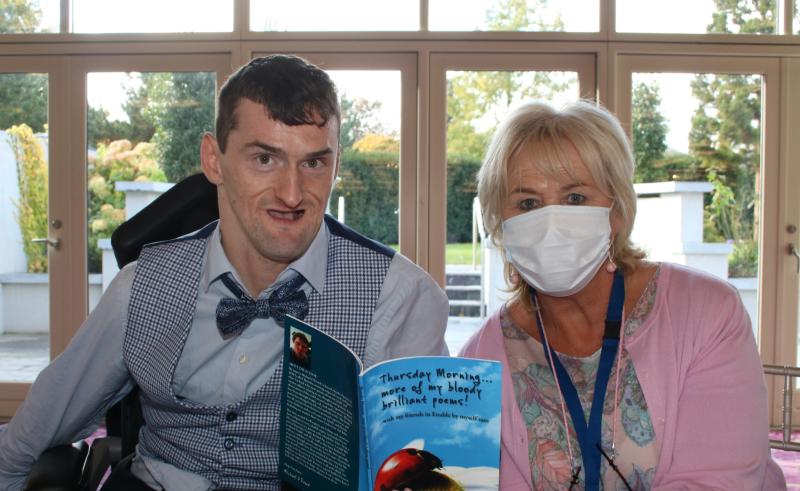 MICHAEL O’Dowd hasn’t always written poetry. But since he began to believe he could write, he hasn’t stopped.

Now Michael has launched his second book in two years with the cheeky and arresting title of ‘More of my bloody brilliant poems by myself sure’.

“I write about my life and the world around me” says Michael, who lives with cerebral palsy and uses a key-board to communicate. “I often write about my family, friends, challenges and obstacles in my life.

But Michael explains that a meeting with Maura Jones, a staff member at Enable Ireland where he is a regular, got him started on the literary road. “When I first met Maura Jones in 2009 she said to me that I’d write a book but I laughed in her face when she said this,” Michael says.

“Her belief in me really helped me believe I could see a blank page and create art. As the years went on I grew in confidence and the last four years I have been writing poetry on a weekly basis for the Poetry Club in Enable Ireland.” 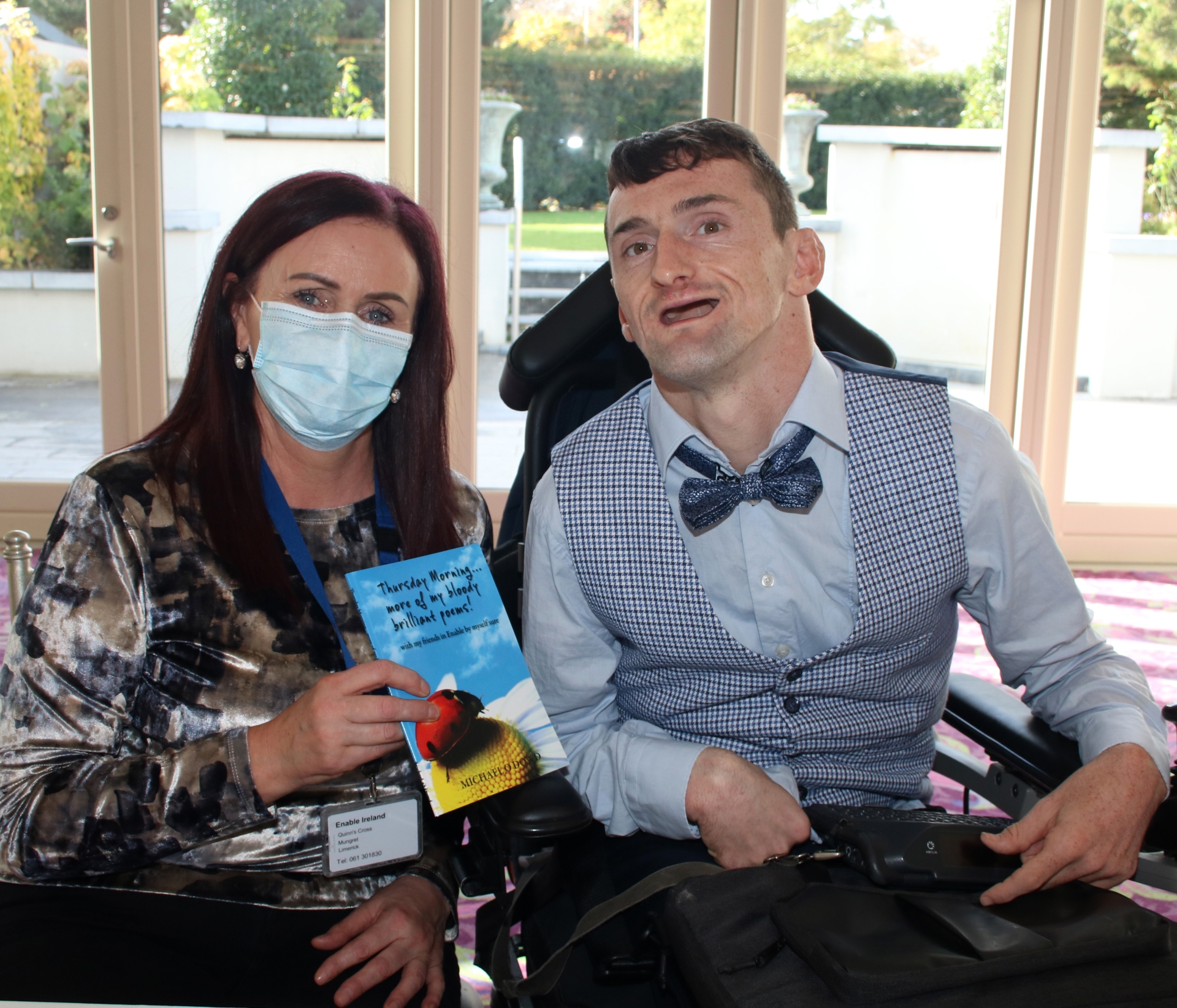 In 2018, Michael continues, he began to write more regularly. “I don’t write every day but I am always thinking about my next poem,” he explains.

“I usually write my poems at home. When I come into the day service (at Quinn’s Cross) during the week I usually edit and re word some parts. Sometimes I write a poem and save it away and think about it, then the next day I might have a new line or word or entire idea I want to write about”.

And, he says, I don’t write every day but I am always thinking about my next poem.” Do you re-write poems to make them better? “I usually write my poems at home. When I come into the day service during the week I usually edit and re word some parts. Sometimes I write a poem and save it away and think about it, then the next day I might have a new line or word or entire idea I want to write about”.

Michael, along with Maura Jones and Mike O’Doherty, established the Poetry Club in Enable Ireland in 2009. Now, he says: “It is the highlight of my week. 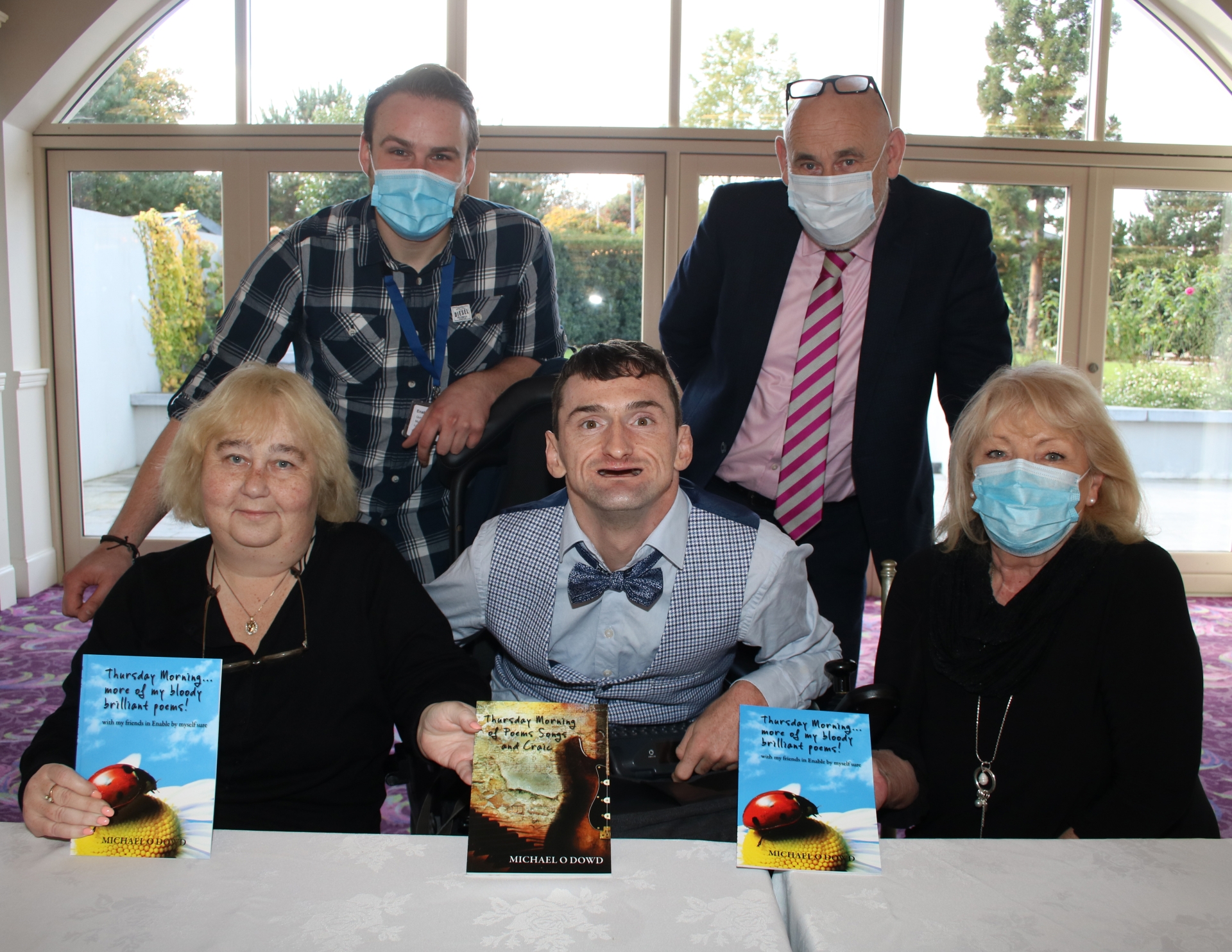 Every Thursday morning I share a new poem with the group. Since Covid we do a virtual poetry group online but we still have about 20 or so service owners who take part and it’s great craic and supportive”.

Michael’s favourite poet is Seamus Heaney and he has his own particular favourites from Heaney’s work. “I always liked the way he wrote He had a good way of writing that was a big inspiration for me,” he says.

Anybody wanting a copy of Michael’s new collection should ring 061 301 830 and leave a request for a copy.

Copies of his first collection, Thursday Morning, Songs and Crack are also available. Books cost €10 each.