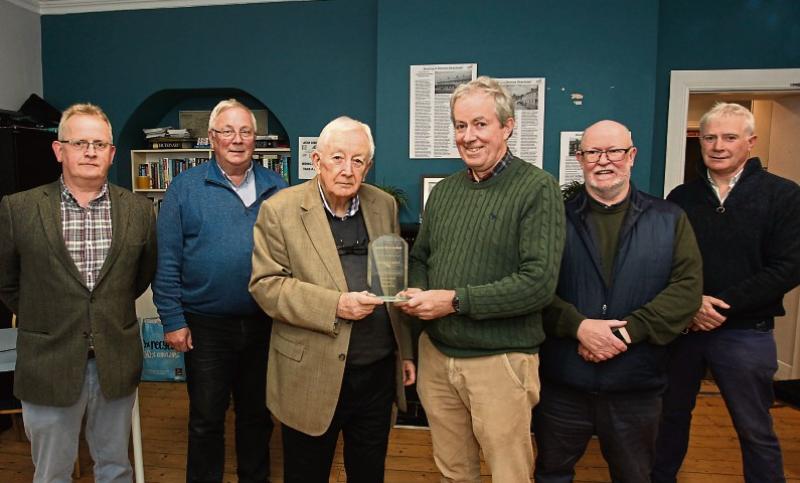 A GROUP of volunteers in Castleconnell and surrounds have landed an award courtesy of Salmon Watch Ireland.

But that is all the Castleconnell River Association will land as they carry out important works to improve the natural environment of the lower Shannon river. It has resulted in an improvement in critically low numbers of salmon fry and salmon redds in local streams.

The association’s chairman Pat O’Connor said with the Shannon salmon virtually on the brink of extinction, it is vital that everything possible is done to help the remaining salmon to breed successfully, and to help return as many smolts and kelts to the sea as possible.

“Salmon numbers in the Shannon are currently reckoned to be at roughly 3% of historical levels,” said Mr O’Connor, which brings home the gravity of the situation.

To help the remaining salmon, Castleconnell River Association has been cleaning spawning gravels and keeping streams clear with the help of fishermen and volunteers from such entities as Castleconnell Tidy Towns, Ormston House Cultural Resource Centre, and Shannon Paddlers Kayaking club.

“Sadly there are still people on the lower Shannon who are living in the past, killing indiscriminately the few remaining salmon when they are trapped in the tidal part of the river by low water levels and rising temperatures upstream. Hopefully this award will bring some attention to the huge amount of volunteer effort it takes to keep these salmon in existence,” said Mr O’Connor.

Yet, this could be a momentous year for the Shannon, because in May 2021 the draft report was published of a new initiative to help fish of all types migrate up and down past the Ardnacrusha-Parteen hydroelectric generating system. Volunteers say that this is not a moment too soon.

“This fish passage project needs to be progressed immediately in all its aspects if it is to make a difference. Meanwhile, it is vital that we do everything we can to protect the remaining brood stock so that there are fish still alive to populate the upper Shannon when it is accessible,” said Mr O’Connor.

Salmon Watch Ireland (SWIRL) initiated the Salmon Hero Award in 2019 to highlight efforts being made to help this most iconic and endangered fish. SWIRL was instrumental in ending drift netting off the Irish coast, and is a leading campaigner against the damage being done by salmon farms off the coast of Ireland.

They are organising a conference on November 6 on river barriers, including Ardnacrusha, details of which can be found on salmonwatchireland.ie