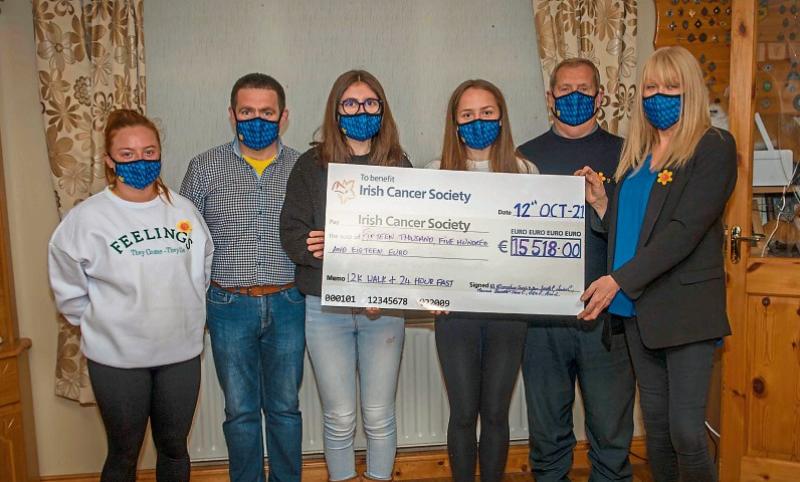 WHEN Mike O' Donoghue was 59 he was diagnosed with bowel cancer.

Twelve years later he has helped to donate over €54,000 to the Irish Cancer Society. It started in 2015 when the Pallasgreen man opened his house to one and all for a coffee morning. It became the longest coffee “morning” in the county as it would start before 7pm and end after midnight!

Every year the numbers kept getting bigger just like his  band of volunteers. But when Covid arrived on our shores in 2020 an indoor event like this was out of the question.

But Mike wasn’t going to let a year go by without raising money for the Irish Cancer Society. They thought up a 24-hour sleep-out and fast on the grounds of Nicker church.  A total of €13,135 was donated online and in person.

Mike and his team of Saoirse Corbett, Tara Campbell,  Aine Looby, Sarah Dillon, Maurice Barrett, Ellie Phelan, Sarah Phelan repeated the sleep out and added in a fundraising walk this year. They incorporated a beautiful Mass celebrated by outgoing parish priest Fr Pat Burns for those who have lost loved ones to cancer.

Mike said they only drink tea or water during the fast and sleep out, get a tiny bit of sleep but they have plenty of craic and chats.

“The Pallas bar and bistro sponsored eight dinners and desserts for us at the end and it was very welcome!” said Mike.

All their efforts were rewarded with a cheque for €15,518 being handed over to the Irish Cancer Society. It bring the grand total to €54,400 in the seven years.

“What’s raised in Limerick comes back to Limerick. It goes to night nurses, pays mileage of volunteer drivers who take people to hospital for appointments and research,” said Mike.

They are already thinking about next year. As successful as the sleep-out and fast has been, a plan is in place to return to their tea and coffee making roots.

“We’ll see what next year brings with Covid but we’re hoping to do our coffee day in June with a marquee on the lawn. It is a lot more personal,” said Mike. Now 71, he shows no sign of slowing down in his fundraising efforts.

“If I said to them over the weekend ‘that’s it, no more’ I’d be shot! They would continue on. Saoirse said in an interview with Tipp Mid-West that “as long as I’m able I’ll continue it”. It is going ahead with or without Mike O’Donoghue so I better hang in there!” he laughed.

Mike said his teeth are worn down from praising Saoirse, Tara,  Aine, two Sarahs, Ellie and Maurice. They devote a lot of time not just on the day of the fundraiser but in planning it.

“They are an absolutely amazing bunch. You couldn’t get a nicer crowd. We work as a team,” said Mike, who thanked everybody who has generously donated money, people who have helped them along the way and the families of the team.