CREATIVITY courses through the veins of the Hartigan family like the Shannon flowing through their homeplace of Castleconnell.

Barbara Hartigan paved the way with her paintings, in particular, portraits.

One of her daughters, Clare, was practically born with a brush in her hand. She has never given it up and is a successful full-time artist.

“I am trying to draw the soul,” Clare has previously said. Her paintings have the power to move the viewer, and ultimately awaken a sense of emotion and feeling from within.

And that is exactly what her daughter, Daisy, is trying to do but in a different medium - acting. The 17-year-old, of Limerick City Youth Theatre (LCYT), was accepted to the biennale National Youth Theatre ensemble from over 300 applicants. They had to be whittled down to a cast of 22. In a great achievement for LCYT they had a second student who got through - Odhran Exton, from just down the river in O’Brien’s Bridge.

Due to Covid, the normal two year experience culminating in a play could not happen so they changed direction and made a film which has got theatre vibes - Aftertaste. Under National Youth Theatre artistic director Veronica Coburn, the cast worked together for a year building the ideas, then had four weeks intense online rehearsals, a dress rehearsal in Dublin and then filming in the Abbey Theatre. They even had a red carpet opening in the Savoy in Dublin.

Written by Ciara Elizabeth Smyth, it offers a theatrical exploration into a world full of chaos, violence and greed. Ireland has a new government, filled with young, righteous, left-leaning politicians. Its Health and Wellness Act, hurriedly signed into law just one year ago, has made it illegal to possess or consume unhealthy food or ‘junk’, but ‘Junk Advocates’ are on the rise and are openly protesting. Eadie Birch’s world is upended when her sister Lila, a popular Junk Advocate, goes missing under suspicious circumstances. 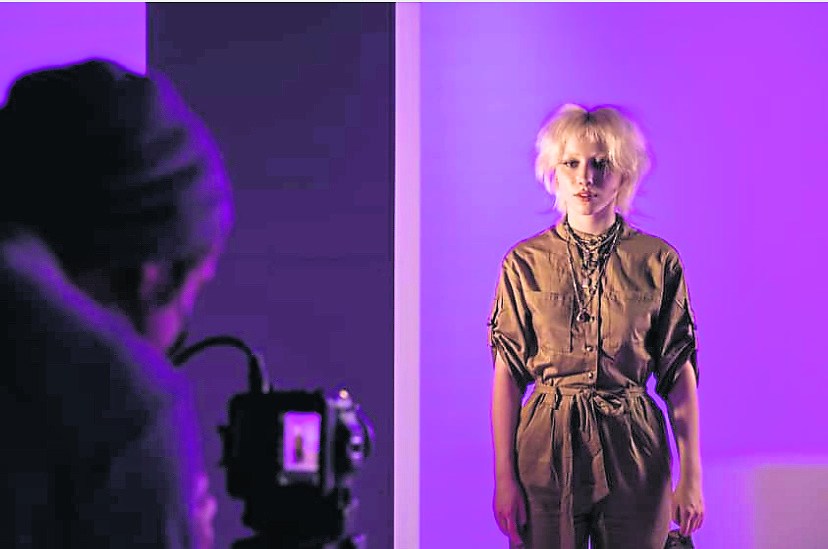 Daisy plays the role of Lila who Daisy says is a “strong, outspoken and hilarious activist that is primarily shown through videos she posted online leading up to her mysterious disappearance”.

“Lila used her platform online to protest against the Health and Wellness Act that President Sanbrooke Martin put in place to promote healthy eating and herd immunity.

“Lila was a really fun and interesting character to play, I really had the opportunity to push my own boundaries and explore my range within her scenes,” said Daisy.

Covid has adversely affected the elderly and young due to the social restrictions put on their lives. Was it nice to have a production of this magnitude to focus on during all this strangeness?

“Some of the ensemble was actually talking about that after the first showing of Aftertaste. A lot of us have been feeling very disconnected with our friends and feel a lot of friendships suffered throughout Covid. We all agreed that having that safe socialization and meeting new people over Zoom was really beneficial to our mental health. Having something so immersive to do that you love so much is an amazing thing to have, especially with everything going on,” said Daisy.

She has now joined many greats in treading the boards in the Abbey.

“I definitely missed the feeling of performing to a crowd of people, nothing compares to it, but it was also amazing to experience performing to a camera for the first time. And especially to do so in the Abbey Theatre, an unreal experience I never thought I’d have. I don’t think I’ve fully processed the whole experience yet. It’s all starting to hit me now,” said Daisy.

It is no surprise considering her surname that she has always been surrounded by and involved in the arts - dance, music, art, acting and writing.

“I ended up including all aspects in my everyday life. Growing up I was actually very music and dance orientated, it was only later in life I started using drawing and painting as another means to express myself. I use art, music and dance to help me feel and adapt to the energy of a scene and character,” she explains.

Daisy’s dream is to pursue acting and directing. She has already studied film production in Limerick College of Further Education for a year. Now Daisy is taking a gap year to prepare for auditions and applications to colleges in the spring of 2022.

Both mum, Clare, and grandmother, Barbara, and all the family are very proud of her success and the passion she brings to acting.

But Clare can go back even further.

“Daisy took part in a play in Castleconnell NS organised by Deirbhile de Paor the year she retired. It sparked a seed. That box of dress up clothes I gave her when she was three really paid off,” smiled Clare.