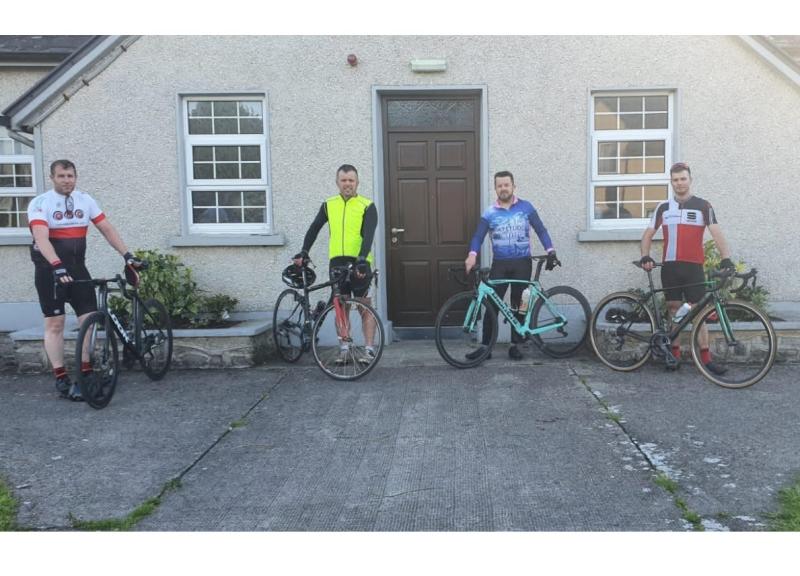 Fit as fiddles: Seamus Collins, Jason O'Donoghue, Pat Collins and Kieran McCarthy will be cycling from Mizen to Malin to raise funds for a new autism suite at Kilteely National School

FOUR men are set to put their bodies on the line for the betterment of current and future generations attending Kilteely National School.

Sarah Jones, Kilteely NS principal, said in 2018 they became increasingly aware of the need for school places for children on the autism spectrum within their own community and surrounding areas.

“We decided to do everything we could to provide the opportunity for these children to attend school in their own locality and among their families and peers.

“As a small rural school, this was a big undertaking but one we felt strongly and positively about. A special autism class was sanctioned and we opened in September 2019,” said Ms Jones.

She says they are now at the stage where funding has been granted by the Department of Education for the building of a new autism suite with a purpose built classroom, sensory room, safe space, staff room and resource teaching room.

“However, the grant only covers the build and not the extra resources needed, sensory garden and internal alterations to our school. We are asking for your help to provide all our students with an inspiring and modern learning environment.

“We hugely appreciate the offer from cyclists – Pat Collins, Séamus Collins, Kieran McCarthy and Jason O' Donoghue – to undertake a Mizen Head to Malin Head cycle from September 2 to September 4 as a fundraising event on our behalf. We thank them for taking on this huge challenge and encourage you to support this worthy cause,” said Ms Jones.

A GoFundMe page has been set up and incredibly over €14,000 has been pledged already.

Marie Collins, the autism class teacher in Kilteely NS, says their goal is €20,000.

“Our mission is to provide children with autism the opportunity to attend primary school in their own locality and among their families and peers. The autism class has been up and running for two years now and caters for six children from both within our parish and surrounding areas.

“The new suite will provide these pupils with a purpose-built classroom, a sensory room and a safe space and the alterations will benefit the entire school community. We see this as a way to build inclusion in our community for these children and for generations to come,” said Ms Collins.

Her husband Pat, his cousin Seamus and friends Kieran and Jason O'Donoghue will be the ones on the saddle.

“The lads have been training since March, going on several training spins a week and building up distance-wise. It will span a distance of almost 600km,” said Ms Collins.

As well as the GoFundMe page you can donate directly to the school or through sponsorship cards in local shops.

The fundraising committee and board of management would like to express their heartfelt gratitude to the four brave cyclists along with back-up-van drivers Austin Shinnors and Pat Ryan; Alan Enright of Truckbreak Ltd for generously supplying transportation and Mike O’Dwyer of Fine Signs.

“We greatly appreciate all the time and effort that has been put in so far and we will be cheering you on all the way! We would also like to say a huge thank you to all the individuals and businesses that have donated so far.

“The response has been absolutely fantastic,” they said.