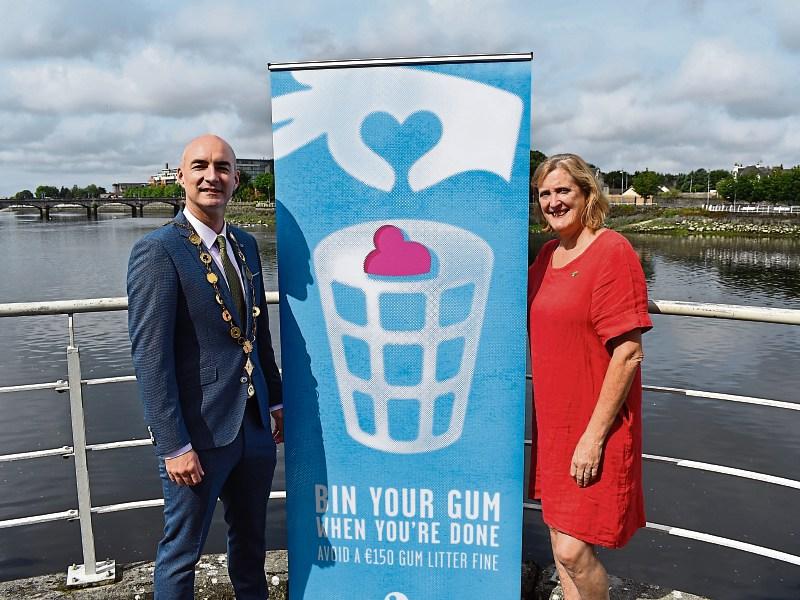 LIMERICK is once again taking on the scourge of gum littering with the launch of an education campaign today.

Established in 2017, it’s an environmental initiative set up to develop and implement an awareness campaign to reduce gum litter in the most sustainable manner.

The 2019 campaign maintained an all-time high of 93% of people stating that they regard chewing gum as litter, up from 74% when the campaign first began in 2007, pointing to the impact of the campaign.

It’s looking to build on the positive momentum of previous years’ campaigns and is making a strong return for 2021 after being postponed last year due to Covid-19.

It will have a stronger social media presence in order to reach a wider and younger audience.

Mayor Butler said: “We can never underestimate the pride that people have in their local towns and villages. As ever, I am confident that the people throughout Limerick will do their town and local community proud by embracing the Gum Litter Taskforce campaign in an effort to invoke positive change within their local communities.”

The mayor invited Limerick City Centre Tidy Towns chairperson Helen O’Donnell to be part of this year’s launch to acknowledge the work this group of volunteers has undertaken in the city centre particularly with their current Twitter campaign targeting gum litter.

Mayor of Limerick @DanielButlerFG has officially launched the Gum Litter Taskforce's gum litter education campaign in Limerick City. The Taskforce is an environmental initiative set up to develop and implement an awareness campaign to reduce gum litter in the most sustainable way

When the current campaign ends, Limerick City and County Council will re-use the campaign assets for a separate campaign later in the year.

Gum Litter taskforce chairman Paul Kelly said: “It is great to see the GLT campaign return and continue its success in changing the public’s behaviour towards gum litter. Since 2007, we have seen a significant decline in the amount of gum litter present throughout the streets, villages and towns of Ireland. Alongside the Green Schools, Tidy Towns and Neat Streets programmes, this campaign aims to play a significant role in the overall reduction of litter and contribute to the betterment of the environment.”