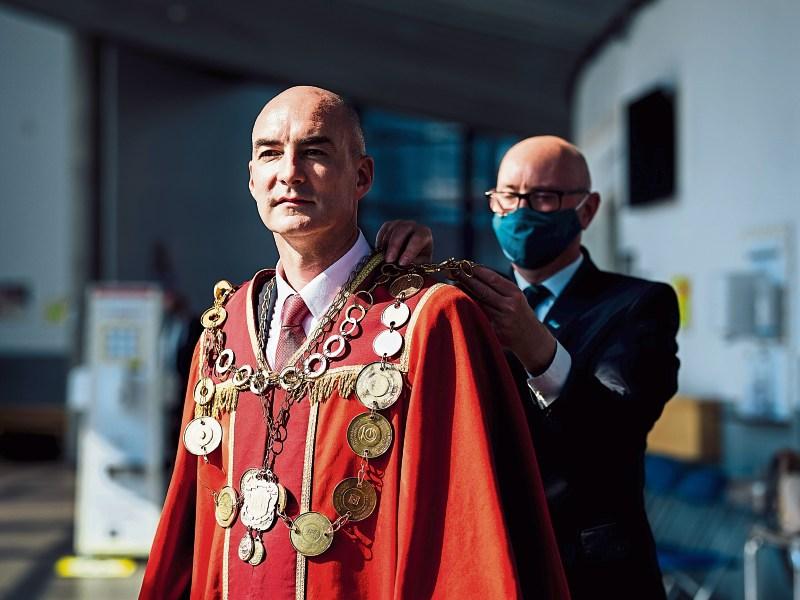 LOOKING out over the cityscape from the new mayor Daniel Butler’s third floor office, it’s easy to see why one would be proud of Limerick.

“It’s an incredible city, and it’s amazing to be sitting up here as mayor: the variety in the skyscape. You can see St John’s Church, we have the very obvious river and the Curragower Falls, and they change depending on what day you see them. They change significantly. If the river changes, everything else around it seems to change with it. It represents what Limerick is at the moment. A city of change. It’s moving, it’s always transitional, but full of life,” he said.

The man holding the coveted office this year was responsible for bringing the Limerick and Proud moniker into wider use, something which proudly features on the front of this newspaper, with the Twitter hashtag spreading to millions of people across the world in response to unwarranted negative coverage of the city.

“I decided – why feed negative with negative, and let’s instead show what we are proud of in Limerick, and the true side of Limerick,” recalls Cllr Butler, with the first Tweets going out on social media in January 2015 following Donal MacIntyre’s TV3 documentary on local crime rates – which continue to fall. It was, of course, brought to the forefront again earlier this year, following a less than favourable article in Forbes magazine.

Another phrase, ‘going up in the world’ is perhaps overused, but it seems apt in the drug education worker’s case.

“It’s amazing to be sitting up here as mayor,” he says, looking down on the streets below, “I still picture myself as a young fella walking through town. I remember going to the Doc's, clubbing when I was 18 and 19, delighted I got in. Meeting my friends outside Todd’s as it was at the time. I cannot believe where I’ve come from to where I am now. It’s pretty mind-blowing,” said Mayor Butler.

The Fine Gael councillor has enjoyed a busy start to his time in office – and that’s likely to continue.

He said: “I think September and October are starting to fill up very quickly which is good news. If I am busy this year, it means Limerick is in a good place and we’re emerging from Covid-19. When I came into office here, someone said to me, the mayor starts tired and finishes exhausted.”

A father-of-two, Mayor Butler is synonymous with Raheen. It’s there he lives with wife Tania and children Jacob, 5 and Layla, who is 11.

While his father, Richard Butler represented Dooradoyle on the old Limerick County Council between 1999 and his untimely passing in 2013. The current mayor was co-opted into his seat.

He has many relatives right across the county, stretching right up to the Kerry border, and his mother, Bernadette, grew up in Glin, then Ardagh.

“My mother’s mother died giving birth to her sister at quite a young age, so one of her sisters then took on the mother role and my grandfather struggled after it. So all the family had to step up and continue to farm. My mum used to get up every morning and milk the cows before coming home to work in the home. They had it hard, and had to work hard. But I’m very proud of my mum. She is an incredible woman, always on the go. A rock, and I’m lucky to have her,” said the first citizen.

The new mayor’s election took place against the shadow of the ongoing pandemic – this year’s annual general meeting taking place in the socially distanced surrounds of the Limerick Institute of Technology instead of County Hall in Dooradoyle.

During the pandemic, Mayor Butler believes a “sense of divisiveness” between people has grown, particularly on social media.

“You can see this internationally, nationally and to a degree locally at times. You either agree with us or you’re against us, there’s no vary. With Covid-19, that was exacerbated, as there was a lot of blame going around, a lot of finger pointing. For the sake of a healthy society, we have to show compassion, we have to show forgiveness and we have to show empathy,” he explained.

Much of this discourse has taken place over Twitter and other internet social networks, and the first citizen hopes to run a small campaign to show the impact web abuse can have, adding it’s important to see what is happening from both the victim and the perpetrator’s side.

Referring to those who do spread abuse on the web, the mayor says: “I’ll look at it empathetically. I think it just says where they are at. They are obviously struggling, and they don’t know how to verbalise it.”

Covid-19 conditions have deemed it too early for the new mayor to make any major plans for his year in office.

But he says he will not stray too far from his period as mayor of the metropolitan district in 2018, where he honoured “ordinary people doing extraordinary things”, using the analogy of the GAA volunteers erecting and then removing flags before and after games – a vital if uncelebrated role.

He hopes to honour Limerick’s Olympians when they return from Tokyo, perhaps enjoy a hurling date with destiny in Croke Park later in August.

“In some ways, the hurlers represent what is going on in the city. Limerick started doing things differently as a hurling team, and they’ve produced the team of a generation. The confidence, the youthfulness and drive that’s in the team, represents a lot of what Limerick is now, and besides success, it’s why people are getting behind them – we see some of ourselves in them,” adds Mayor Butler.

When the hurlers finally broke a 45-year hex and won Liam MacCarthy in 2018, the City West councillor stood alone in Croke Park and looked to the heavens. For he dearly wanted his father Richard – a minor county champion with Mungret – to be able to witness the moment with him.

“I was there against Offaly, and remember the pain and anguish of getting off our seats, sitting on the steps ready to go onto the pitch and then for it all to fall apart. I know the pain, and to see when we won it, all the emotion just came out.”

An ambitious politician, Cllr Butler has ruled out seeking a Dail nomination at this time, saying it’s a case of “family first”.

However, asked on the new Directly Elected Mayor’s role, an election for which could take place next year, he was more circumspect.

“It’s something I get asked on average twice a week. I take it very much as a compliment if people consider me a suitable candidate. It’s the one I wouldn’t rule out, but it’s a massive role,” he said.

For now though, his sole focus is on his year in charge – and he has asked the people of Limerick to not be afraid to come up and say hello if they see him at events.

“You’ll see a lot of me around. I will do my best to listen. We won't always agree, but I’ll always respect your view. But don’t be shy – make contact with me,” Limerick's first citizen concluded. For more, see www.limerickleader.ie