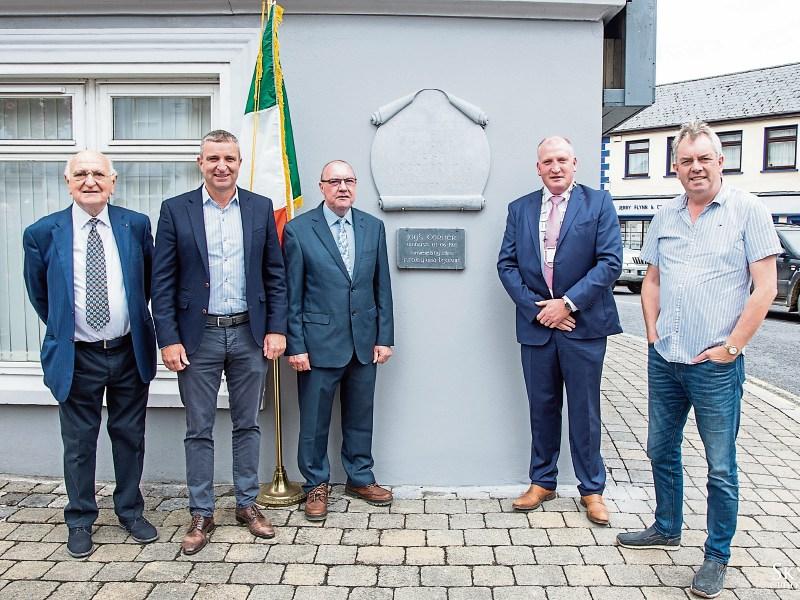 JULY 11, 1921, was a great day for the Irish people, said Gerard Collins, speaking exactly 100 years on in Abbeyfeale.

“The British government was ready for a truce with the Irish people who had been fighting for Ireland’s independence and had forced them to this position,” said the former minister for foreign affairs and justice, who gave the oration at a plaque unveiling at Joys Corner.

“Today, July 11, 2021 is a great day for the families of the people of Abbeyfeale who were involved in this struggle. The plaque reads, ‘Commemorating all those involved in Ireland’s War of Independence especially all those who lost their lives’,” said Mr Collins.

His father, Jimmy Collins, was the captain of the Abbeyfeale company who were engaged in the Joys Corner ambush shortly before the truce.

The plaque was unveiled by local councillors, Frances Foley and Liam Galvin.

“It is a magnificent Romanesque style plaque, very professionally crafted by our friend Ruairi Dennison. Cllr Frances Foley and Cllr Liam Galvin sponsored the plaque and I am truly delighted that they as the elected representatives in the immediate area were the people who unveiled it,” said Mr Collins, who grew up listening to stories from his father and his relations from their time in the old IRA.

He tells the Leader what occurred during the Joys Corner ambush on June 5, 1921. The planning of it was something from a modern day movie.

Mr Collins said for a couple of weekends before that his uncle Mick and a man called David Shanahan put up a few stencils / posters between the Black and Tan barracks in Bridge Street and Joys Corner telling the British to kindly leave the country in a variety of different ways.

“On the following Sunday morning the Tans came out at daybreak and tore down these posters before the people could see them on their way to church.

“On another night they put a half dozen extra posters on the gable wall of Joy’s Corner facing Eggleston's  house. The idea was that when the Tans would come to tear down these posters, the boys would be waiting for them,” said Mr Collins.

Members of the Abbeyfeale company came to town about 3.30am.

“Twelve shotguns carriers went into Eggleston's house and laid in wait. They would only have to fire across the road. My father and his company were across the other side of the street in Hartnett’s house. They had some rifles and when the boys with the shotguns fired there would be a run for cover by the Tans and then they would be shot.

“The Tans appeared. Eight laid down their rifles while they were pulling the posters off Joys house. My father and his group were waiting for the men with shotguns to fire. There was no gunfire. He lifted the blind a few times to give them a signal. He was seen doing it. A Tan fired at him, hit his rifle and he had a flesh wound from it,” said Mr Collins. Again, a bit like a movie, the men in Eggleston’s had gone downstairs to eat their breakfast and forgot about their duty

“What would have been a massive well publicised success for the IRA at the time backfired somewhat. There were casualties. One Tan was killed, one sergeant injured and four others injured,” said Mr Collins.