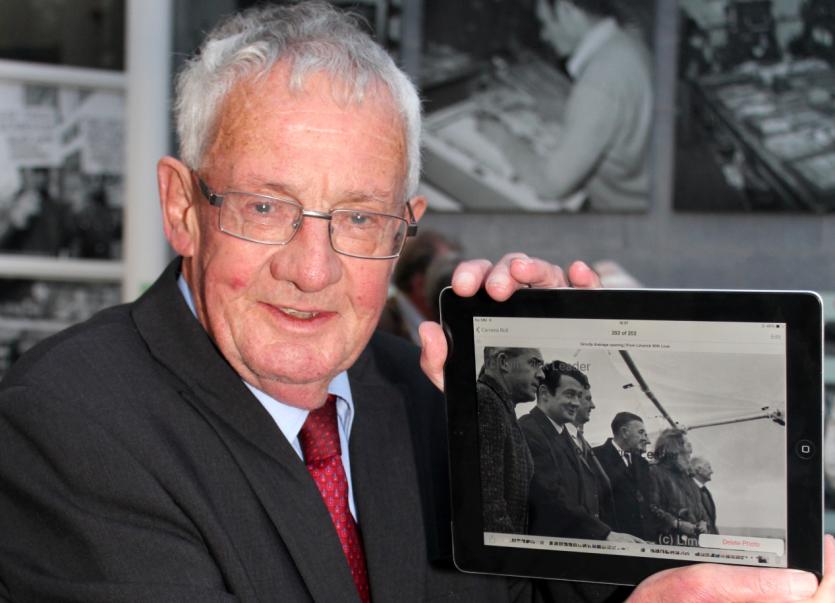 TRIBUTES have been flowing in since the announcement earlier today of the death of the former Limerick TD, former minister and former leader of the Progressive Democrats, Des O’Malley.

The Mayor of the City and County of Limerick, Councillor Daniel Butler, led the tributes saying that Limerick has lost a man of absolute decency and integrity. He also announced that an online Book of Condolences has been opened in memory of Mr O’Malley and can be signed up to August 6 HERE

The tricolour is also flying at half mast on Merchant’s Quay, Limerick, the council’s corporate headquarters.

“This is a very sad day first and foremost for the O’Malley family but also for the local and national political community and for Des O’Malley’s many, many supporters over the years,” Mayor Butler said. “He had proud and well-founded principles that were the bedrock of a career that was pivotal in Irish politics in the ‘70s, ‘80s and ‘90s.

“He stood steadfastly and fearlessly by those convictions, often in trying circumstances. This was really a hallmark of his career and, indeed, led to one of his many and perhaps best remembered achievements, the creation of the Progressive Democrats party, which was a  “He will be remembered as a very significant Irish politician but he was, ultimately, a proud Limerick man and made a huge contribution to the development of this city throughout his career, reflected by him standing successfully for Dáil in 11 successive elections. Des O’Malley will be remembered as a great, courageous and ultimately hugely successful politician, a great family man but also a proud, proud Limerick man.”

The Taoiseach, Míchéal Martin said he was “deeply saddened” at news of Mr O’Malley’s death. He described him as a major figure in Irish public affairs for over 30 years, who had “represented the people of Limerick and our  as a whole with determination and a commitment to making Ireland a better place.”

“He showed an ability to work with others on a positive programme and to put to one side disagreements. In doing this he helped set a new course for Irish politics,” the Taoiseach said.  “His was a life of courage and consequence. He loved his country and was fearless in challenging those who used violence to undermine it.

Former Tánaiste, Mary Harney, who took over as leader of the PDs in 1993, said Des O'Malley was a "great friend and mentor"  "We had an enduring friendship that spanned 40 years.

"He spoke the truth and matched it with his actions. At a very troubled time in our country, his bravery was rare. He was the finest public servant I have had the privilege to know."

“I think the State owes him a significant debt of gratitude,” Fianna Fáil TD, and himself a former minister, Willie O’Dea said.

In a reference to the political turmoil in Fianna Fáil which eventually led Des O’Malley’s expulsion from the party of his forebears and set up the Progressive Democrats, Deputy O’Dea said: “People will know that there was a lot of infighting in Fianna Fáil during the leadership of Charles Haughey, but even those on the opposing side to Des O’Malley would concede he had a powerful intellect. He was always straight as an arrow with no hint of corruption ever.”

“Des was deeply involved in a number of attempts to unseat Charles Haughey as leader of Fianna Fáil and I supported him on each and every occasion. Had he succeeded, the history of Fianna Fáil might have been very different and I have no doubt that we’d be in a much better place than we are now.”

Des O’Malley, he added, faced down a very serious threat to national security when he was Minister for Justice and was a brilliant Minister for Industry and Trade.

Another Fianna Fáil TD, Minister of State Niall Collins also paid tribute, saying: “There will be huge sadness at the passing of Des O’Malley. He was an outstanding public representative locally and nationally for years and made a huge contribution at government level for decades.”

Former minister and MEP, Gerard Collins, recalled the by-election of 1968 when Des O’Malley was first elected and together they were appointed to ministerial posts by then Taoiseach Jack Lynch in 1970. “It was an exceptionally difficult time for Des,” Mr Collins said. “We had murder and mayhem and robberies and juries were being got at and we had the burning of the British Embassy. But he did it exceptionally well. He had to live with all the threats that came his way.” Mr Collins also praised Des O’Malley’s work in promoting industry.

“As a person he had a great sense of humour, a powerful sense of humour. He was a keen sportsman, loved a little flutter on the horses, and was a great sportsman for dogs on the track and coursing. He loved going to Connemara with friends.”

“It is a sad day. He was a wonderful man,” said Cllr Brigid Teefy who joined the PDs in 1985 and remained a member until it was dissolved 22 years later. “He was a brillian politician, a brave politician.” And she recalled the euphoria around the setting up of the PDs, with packed meetings all around the country and wonderful speeches from Des. She recalled too the wonderful speech he made in which he declared ‘I stand by the Republic’ during a debate on contraception in the Dáil. “He has left a long-lasting legacy.”

Fine Gael TD Kieran O’Donnell described Des O’Malley as a “political colossus” who had left an “enduring legacy of supreme public service” to the people of Limerick and the State.

“During the course of a long, successful and colourful career, and on many occasions when he must have been under incredible pressure and strain, he remained resolutely steadfast to his beliefs and his conviction won out in the end – to the benefit of all on this island,” he added. “I knew Des and always found him to be highly intelligent, engaging and quick witted with a sharp political mind. He had a passion and keen interest in all things Limerick.

Minister for Justice Heather Humphreys also paid tribute to the man who had held the same position in very difficult times in the early 1970s. “Des, his late wife Pat and their family endured great risk including threats from those who sought to undermine the authority of this State but Des never wavered in his duty and commitment to preserving our State and the safety and security of all its people.”

“He was a republican in the truest sense of the word, one who broke the mould of Irish politics and helped modernise our society and our economy.”

“He was part of a diverse movement of people across all swathes of Irish life, in many different political formations who sought to break the grip of civil war politics in the 1980s and 1990s and the ramifications of that continue to this day,” Deputy Kelly said.