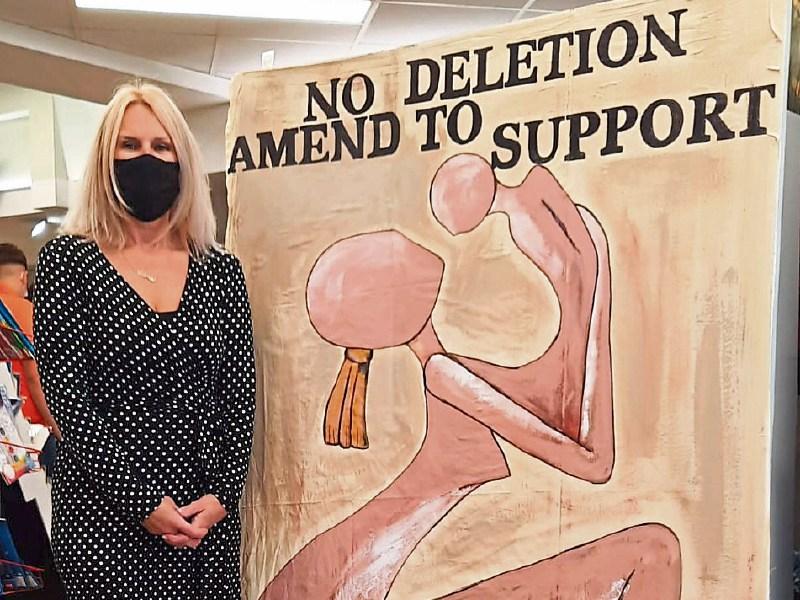 “WE want a new Ireland. We want an Ireland that appreciates women and doesn’t see them as second-class citizens,” declares Val Foley who describes herself as a socially engaged artist.

Val, from Rathkeale, is passionate about Article 41.2 of the Irish Constitution, the so-called “women’s place in the home” clause, which is at the centre of her MA in Socially Engaged Art at the Limerick College of Art and Design.

“I am not a politician,” she is quick to point out. “I am a socially engaged artist so I do not have all the knowledge about political matters. I first came across ‘the women’s clause’ during my research for my MA about the unrecognised and unpaid work that women do in the home.

“My interest came about in this subject from a personal perspective as a mother of five children who worked while I was rearing my children and know the pressure and challenges that came with this.

“Women have been the cornerstone of society for centuries, giving birth and rearing the next generation of workers without any support from society or government. They have been "invisiblised" and unrecognised and expected to do this job, and most double-job to make ends meet.”

Over the past number of years, various attempts have been made to change Article 41.2.

In 2013, the Constitutional Conference recommended it be removed and the government, in its Programme for Government 2016, gave a commitment to hold a referendum on the issue in 2018 which was deferred.

Earlier this year, the Citizens Assembly on Gender Equality called for the article to be deleted and replaced

“I would like to get a dialogue going about the issue,” says Val. The article, she points out, was written in 1937, and no longer relates to the society we now live in. “Even back then I think it was archaic and should never have been put in the constitution,” she says.

But she argues: “We have to be very careful. If we delete it, there will be no support. I would like the government to financially support any person who has to stay at home to rear and mind kids.”

However, she is adamant it must be gender-neutral and extend to men as well as women.

“I am going to petition the government to amend the constitution,” she continues, emphasising that the wording of the amendment is crucial. So far, she has held an action day to collect signatures in Rathkeale and has started an online petition, which you can access via Val’s Facebook page.

Val, who ran a shop in Rathkeale for many years, says she was always interested in art but never had the time to pursue that interest until she leased out her shop and started studying.

She graduated from LSAD with a degree in Fine Art in 2019 and is now working towards an MA. Socially engaged art, she explains, is concerned with “any social issue I could raise awareness of through my art. Artists, she argues, have always been political and she points to Banksy and the Guerrilla Girls as modern-day examples."