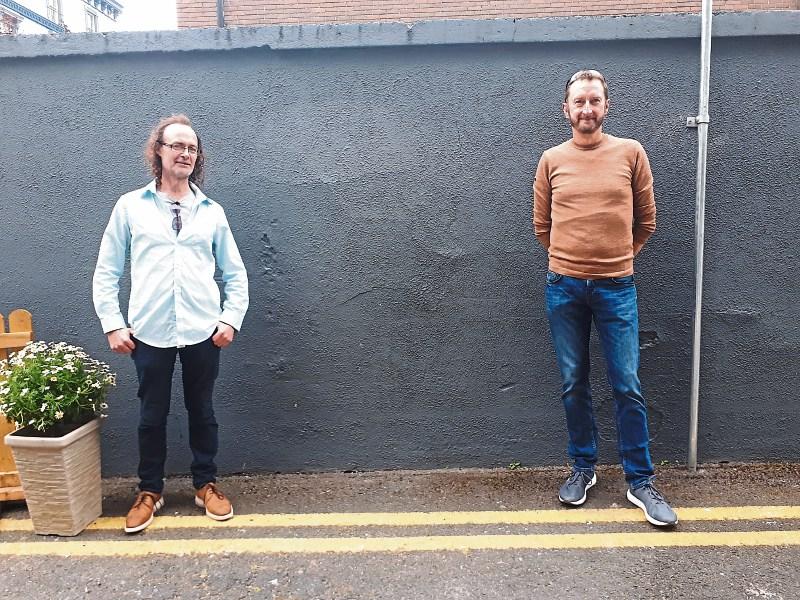 A fresh start: The Glen Tavern owner Ger Callanan with artist Carl Doran at the Theatre Lane wall where the mural will be painted

A CITY centre pub has opened a competition to design a bright, colourful mural for a grey wall.

Like many pubs across Limerick, the Glen Tavern has been allowed to serve its customers outside, and has taken advantage of the adjacent Theatre Lane, which has been closed to vehicles during the evening.

Now, a call has gone out to artists across the city to help design a new mural on the wall behind the former Bank of Ireland branch, with a €1,000 prize up for grabs.

Pub owner Ger Callanan said: “During Limerick City of Culture in 2014, there was a beautiful mural along here, but unfortunately when the bank closed down, the wall got damaged and the mural had to be painted over. It's actually something that people have missed. We decided there at the start of the year to help celebrate the culture up here.”

He wants to avoid sporting murals where possible, and have murals related to Limerick’s rich theatrical culture instead.

Entrants are asked to provide a 50-word synopsis on what the mural will be about, 50 words on how they intend carrying it out, and a to-scale drawing.

The winner will get €1,000, with their mural adorning the wall, while there are nine runner-up prizes of a €20 voucher to spend in The Glen Tavern.

Ger said that even when the pub is allowed to trade indoors, it hopes to keep the outdoor seating on Theatre Lane so customers will be able to enjoy the mural.

Artist Carl said: “We are looking for something that is suitable. But that doesn’t mean it cannot have an edge.”​

The closing date is July 23.