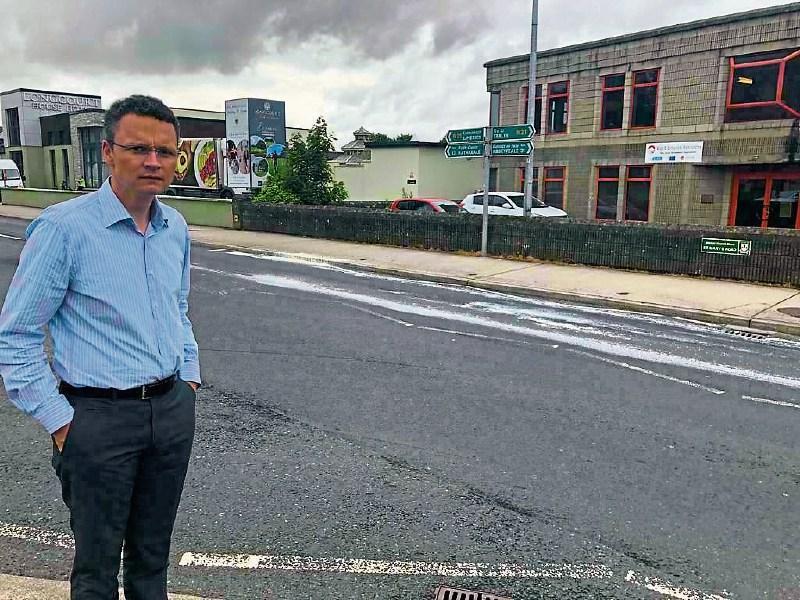 A MILK lorry driver had to brake so hard at a pedestrian crossing that the road was covered in milk .

It occurred right outside the office of Minister Patrick O’Donovan on St Mary’s Road in Newcastle West. He has written to Limerick City and County Council regarding additional signage to give advance warning of the crossing before there is a fatality.

“The noise was unreal. How the man escaped was a miracle,” said Minister O’Donovan who was in his office at the time of the incident on Friday, June 25.

“There have been several near misses but last week a visually impaired person was on the crossing on the road and a milk lorry was coming from Limerick. The milk lorry braked - he literally had to stick the lorry to the road - so much so that the milk came out over the top of the lorry,” said Minister O’Donovan. The milk on the road can be seen in the photograph.

He said there is no blame on either side and is just glad nobody was hurt but it was very close.

“The lorry couldn’t have seen the person until very late. There is a blind spot. They both must have got awful frights,” he said. The lorry would have been carrying thousands of gallons of milk.

“I've written to the council that there needs to be work done to the road there to give advance warning that there is a pedestrian crossing on the road because people have complained to me that coming off of Sheehan’s Road in the town and turning right, and even coming from the Killarney side, the crossing is very blind. It is obscured. There is a serious problem there. We don’t want to see a fatality on that crossing,” said Minister O’Donovan.

He said along that section of the N21 is probably the busiest national primary road in County Limerick.

“It’s one of the most trafficked crossings in the county. It's something that needs to be addressed as a priority. I know that the council are in the process of looking at a traffic management plan for Newcastle West. It's long overdue.

“It’s been spoken about for months and months at this stage and I know the residents and business people in the town are looking for it for a long time. It highlights the fact that between the traffic and the national road going through the town there is a serious problem for people that are living and moving around the town.

“We need to see the council's plan together with Transport Infrastructure Ireland which obviously should not come at the expense of people living, working and parking in Newcastle West,” said the minister.

He stressed that Newcastle West should not be put at a disadvantage for the sake of the national primary road with whatever plan the council comes forward with.