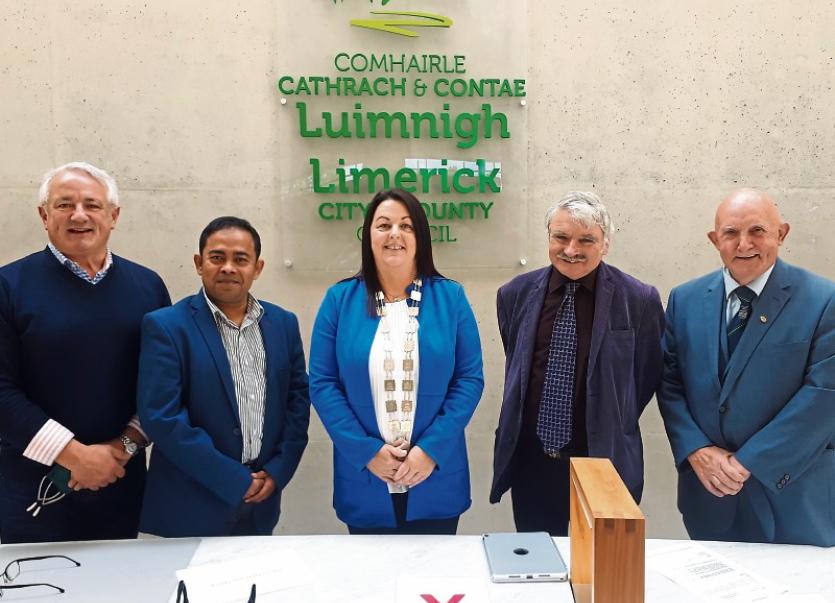 FIANNA Fail councillor Catherine Slattery has been elected as the chairperson of Limerick's metropolitan district.

The City East area member, who works as Willie O'Dea's constituency secretary, secured the chain of office after winning 13 of the 20 votes available at the annual general meeting of the metropolitan district this Monday morning.

It's the second year in a  row the meeting has taken place in County Hall in Dooradoyle as opposed to City Hall in the heart of Limerick.

This is because a larger chamber is required for social distancing purposes due to the ongoing Covid-19 pandemic.

While normally that ceremony would be held at County Hall, it's been moved elsewhere for the second year in a row with the LIT Millennium Theatre this time playing host.

Last year, the venue was the Limerick Racecourse which is now being used as the county's vaccination centre.

Cllr Slattery was nominated by party colleague Kieran O’Hanlon, and seconded by Jerry O’Dea. She was joined in the chamber by Mr O’Dea plus her family and friends.

As well as Fianna Fail and Fine Gael, she won the backing of Independent councillors Franakie Daly and Fergus Kilcoyne and Labour’s Joe Leddin.

At this morning's meeting, there was also a nomination for Green councillor  Sean Hartigan, who was backed by party colleague Cllr Sasa Novak and John Costelloe, Sinn Fein.

They got seven votes.

#BREAKING: @slatterycllr, has been elected as new leader of Limerick's metropolitan district, securing 13 of the 20 votes available. Beat off challenge of @seanohartigan. She's pictured with her boss, @willieodealive. Full story on @Limerick_Leader shortly. pic.twitter.com/T9LosjUGf6

Speaking upon taking the chain of office, Cllr Slattery - mother to Kate, 23 and Adrian, 14 - said the reason she loves being in politics is that "all day and every day, we try to help the people of Limerick as best as we can. Doing that – just in itself - sends you home each day with a bounce in your step."

She pledged to be "a Cathaoirleach for each and every Limerick person."

A first pic of @slatterycllr in the chain of office addressing metropolitan councillors.

Just as a side note, it's the first time in the history of Limerick one women has succeeded another in a top @LimerickCouncil position, according to veteran councillor Kieran O'Hanlon. pic.twitter.com/QILCYp3FsT

"I am so proud to be a Limerick woman - and a Limerick woman in local politics. As a single Mother it is not easy to take the step and put yourself forward, but I am so glad I did. I hope that by doing so I will inspire other women to take the step and get involved. Yes, it can be a hard slog. But, it is so rewarding when you get a job done and see the rewards in local Communities and on the faces of individuals."

Born in Prospect, she's also lived in Rathbane and the Hyde Road.