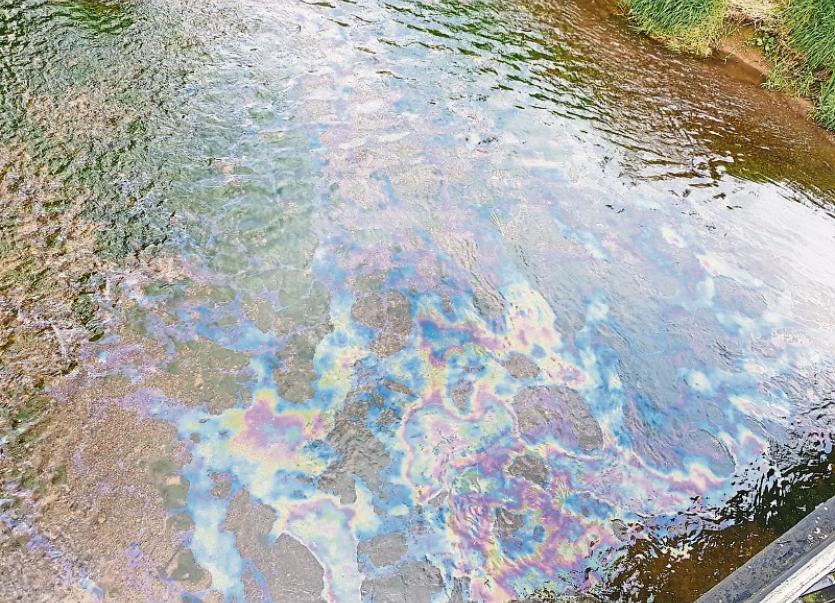 THIEVES didn’t just steal diesel from a County Limerick farmer and damage his tank – they also polluted the local river.

Their criminal and reckless endeavours brought back memories of a major fish kill in the river Loobagh in Kilmallock seven years ago.

Their actions have been condemned by local councillor, Mike Donegan and chair of the local angling group, Eamon O’Riordan, who both contacted the council to report it.

A spokesperson for Limerick City and County Council said they received reports on Bank Holiday Monday morning of a sighting of oil in the river at North Bridge, Kilmallock

Council staff attended the scene, noted the slick and worked their way back upstream along a tributary of the river that converges with it just upstream of North Bridge.

“They also noted traces of the hydrocarbon in the stream at Springwell Bridge and at Bawntard Bridge about two miles east and close to Bulgaden.

“They then spoke with a farmer who was working nearby and he directed them to a green diesel tank which he uses to top-up his vehicles.

“He advised council staff that there had been a theft of a significant quantity of green diesel from the tank and that the thieves had left the valve open, presumably when whatever containers they were using had been filled. The remaining diesel had then worked its way with gravity into the stream,” said the council spokesperson, who added that the crime has been reported to gardai.

It is difficult to estimate when the theft took place as the water in the stream is slow moving and it may have taken some time for the slick to reach North Bridge.

“Roads foreman Seán O Meara provided invaluable local knowledge and with the rest of the staff, arranged for a boom to curtail the pollution to be deployed on Monday evening. It will remain whilst the environmental engineer and staff monitor and evaluate along with the senior roads supervisor,” said the council spokesperson.

In contrast to the fish kill due to an agricultural effluent system failing in 2014, no trout or salmon died on this occasion, said Mr O’Riordan.

The chairman of  Kilmallock and Kilfinane Anglers Association said diesel floats on top of the water and it will dissipate over time. In good news, Mr O’Riordan said fish stocks have improved in the locality in recent years. This is due to the works carried out by the angling association and others.

“We always have to acknowledge the effort of farmers. When you have a combined effort then you see a result,” said Mr O’Riordan, who also praised the council staff and Inland Fisheries Ireland for their response on a Bank Holiday Monday.

Cllr Donegan, who smelled the diesel while taking his dog for a stroll on the Priory walk, also praised council staff for going “beyond the call of duty” and erecting the boom.

“Great credit must go to council staff. On the Saturday of the same weekend there was a sewage overflow in Bruree. Within two hours of contacting them they had a truck out clearing it up. As a member of Maigue Rivers Trust I will be discussing these incidents at our municipal district meeting,” said Cllr Donegan.