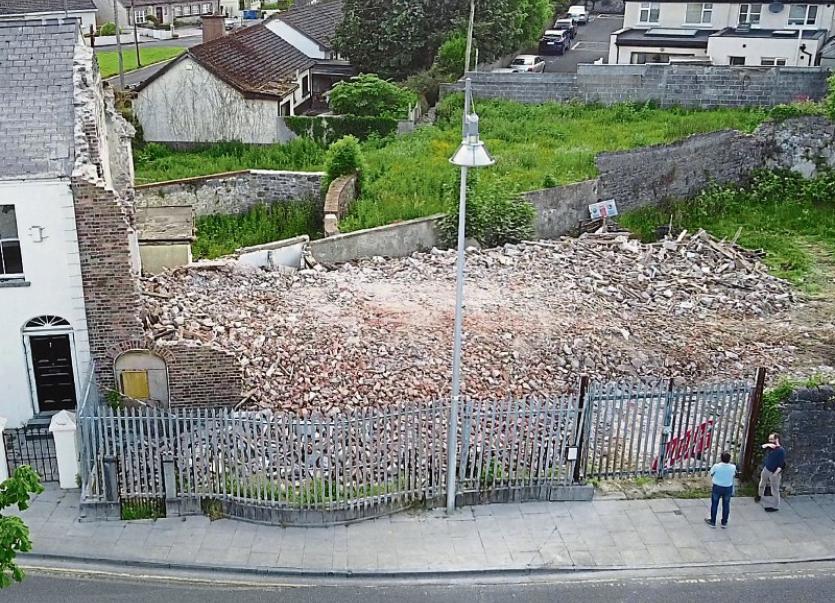 THE demolition of a popular building on Limerick's riverside has caused dismay, with the move being described as "a punch in the gut".

Dr Paul O'Brien was speaking after he joined many others over the weekend in watching the landmark complex razed to the ground in order to make way for a new development.

"A very sad day," he tweeted, "Several individuals and groups (all volunteers) did their best over at least four years to save this building, but despite their best efforts including drawing on expert opinion, the powers that be untimely refused to prevent its destruction. The destruction of our built heritage continues apace. Yes, it would have taken a considerable sum to put Curragower House right, but it would have been the right thing to do."

A small sample of beautiful, handmade eighteenth-century bricks and splinters of pitch pine are all that remain of Curragower House. We need to protect #Limerick's fragile built heritage, so much has already been lost and many more buildings are facing a similar fate. pic.twitter.com/r3qKvL3KF0

Meanwhile, a prominent city solicitor has called for an investigation into what led the historic Curragower House to be knocked.

Michelle Hayes was speaking amid what she said was “shock, sadness and dismay” as the bulldozers moved in on the former landmark building in Clancy’s Strand.​

Final tweet on this sad matter. I captured the before image in January 2021. Both images were captured from my drone. Thankfully, I recorded over 15 mins of footage of the house (from all angles) in January. Please credit me, if using the stills. pic.twitter.com/zmGALgBzug

A very sad day. Several individuals and groups (all volunteers) did their best over at least four years to save this building, but despite their best efforts including drawing on expert opinion, the powers that be untimely refused to prevent its destruction. A punch in the gut. pic.twitter.com/fSGQRt9zU6

The move was controversial, with councillors previously voting to have the complex added to the list of protected structures, which would have spared it from the chop.

However, this ran into trouble, due to the fact a planning application was active.

It will be replaced with one living space, three apartments and a cafe.

An Taisce Limerick has long opposed the ​proposals, with its former chair Ms Hayes writing a lengthy objection to An Bord Pleanala.

In a statement, she said: “​I call on the planning regulator to conduct a full investigation in relation to how the administration and executive of Limerick City and County Council dealt with Curragower House including its refusal to implement the wishes of the Limerick people and of councillors to protect it.”

Curragower House, Limerick, which has sadly and needlessly been demolished this weekend; given permission by @anbordpleanala in the face of strong opposition, & thus setting an appalling precedent for similar historic riverfront buildings in towns and cities all over the country. https://t.co/uDK1JAkm6E pic.twitter.com/qxyOtRUlua

Limerick Council include a picture of Curragower House in their #LimerickAndProud messages. I don’t think they have too much to be proud of today. They’ve reneged on their responsibility to protect Limerick #heritage https://t.co/ZOPBZSHwWX