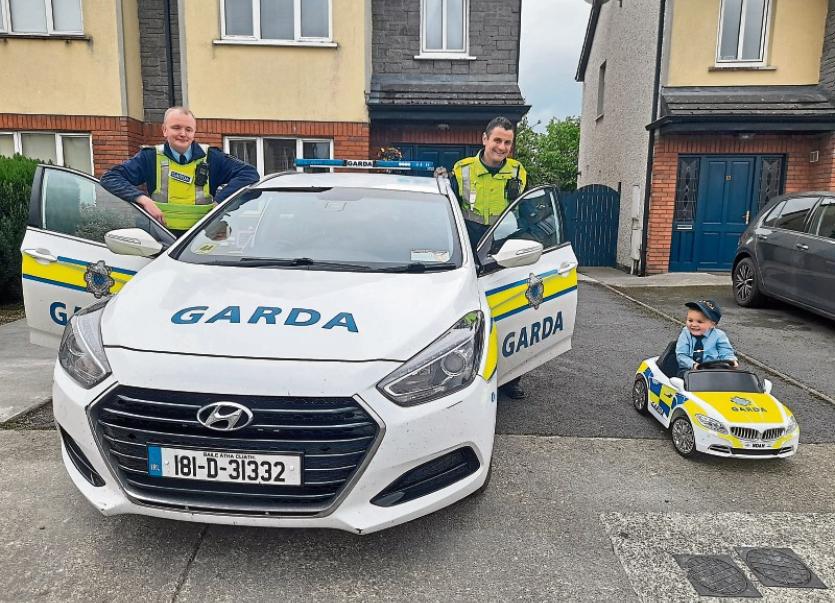 LIMERICK-based garda David Stapleton was supposed to be surprising Noah Quish when he visited in a patrol car but it was the four-year-old who shocked the Doon man with a present.

Noah, who is battling serious illness and has had numerous life-saving surgeries, greeted Garda Stapleton with a birthday cake and balloon.

The former Limerick U-21 All-Ireland winner and Doon hurler recently turned 42. To mark it, he is running a marathon this weekend.

It is Noah’s bravery that inspired David to take up this running challenge earlier this year and raise funds for Little Blue Heroes.

“I’ve never met Noah but I’ve read the stories about him in the papers and little ads that come out in work. He is living in the garda district that I am covering. I’m looking forward to meeting him,” said David back in March.

They did meet last Thursday and got on like a house on fire. Noah, who loves the gardai, was dressed to impress in his uniform down to his garda tie clip. His patrol car rivals David’s.

Noah’s parents, Una and John Joe, originally from Ballylanders, welcomed the guards outside their Monaleen home.

“Noah and David had a great time together. When I first heard about David doing a run after being inspired by Noah, my heart melted. I didn’t know about it until I read it in the paper and it brought a tear to my eye to think that someone we have never met would run a marathon for kids like Noah," said Una.

“We are so proud of Noah and how many people he has inspired, he brings a smile to every face he meets and brings out the best in people. He has had such a tough life and still has tough days even though he's always smiling. He makes us so proud with his determination every day,” she continued.

Una says the Little Blue Heroes charity has been an amazing support to them as a family.

“They have been there at the end of the phone when we needed them. Noah's colleagues in Henry Street Garda Station have made a little boy and his family so happy. There has been days when Noah wasn't feeling the best and his garda colleagues called. When Noah sees the garda car outside his face just lights up. Needless to say we all smile and forget the hard times,” said Una.