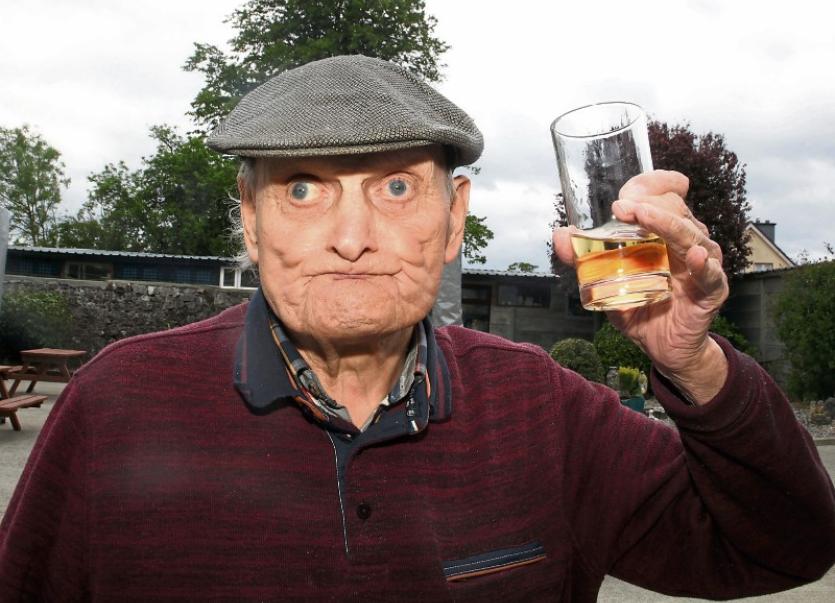 FOR 15 long months, 96-year-old Gilbert Smith remained cooped up in his home in Ballybrown, for fear of catching Covid-19.

That is until this week when he finally left his home, confident enough to do so after his vaccination against coronavirus.

And his first port of call?

With pubs able to welcome customers to sit down outdoors, Gilbert received a warm welcome to Punch’s Bar in Patrickswell.

“It’s great to be home,” he smiled upon sitting down at a table.

Gilbert, who turns 97 next week, has been cocooning since the onset of the first national lockdown in March 2020, and only felt safe to go out now.

Ger Moroney, his neighbour and long-time friend said: “He really enjoyed himself. I’m just after dropping him back home. He has the radio turned on, and he’s sitting down with the heater on in front of him. He’s smiling away happy out – I’m thrilled for him!”.

“He wouldn’t be a drinker, but if he does go to the pub, he’d have a few just for the company. Isolation was very tough for him,” added Ger, who described his pal as “a pure gentleman”.

"He was a bit nervous about going back as he hadn't been out since March 12 months ago - the start of lockdown. But he certainly enjoyed himself. It's about getting out, and meeting people When he's home alone he doesn't really meet anyone,” said his neighbour.

Ger believes Gilbert is the oldest man in both the Ballybrown and Patrickswell parishes.

“The isolation is very tough. He was ok for the first couple of months, but the longer it went on, the tougher it got, to be quite honest with you,” he added.

“He won't drink anything else,” smiled Ger.

“He's a pure gentleman. As he always said, his word is his bond. If he can do something for you, he will do it for you. He is a very decent man. He is great company. I pop over every night to see him. We sit down by the stove and away we go. He can go back to when he was a child all the time. He's a really good man,” Ger added.