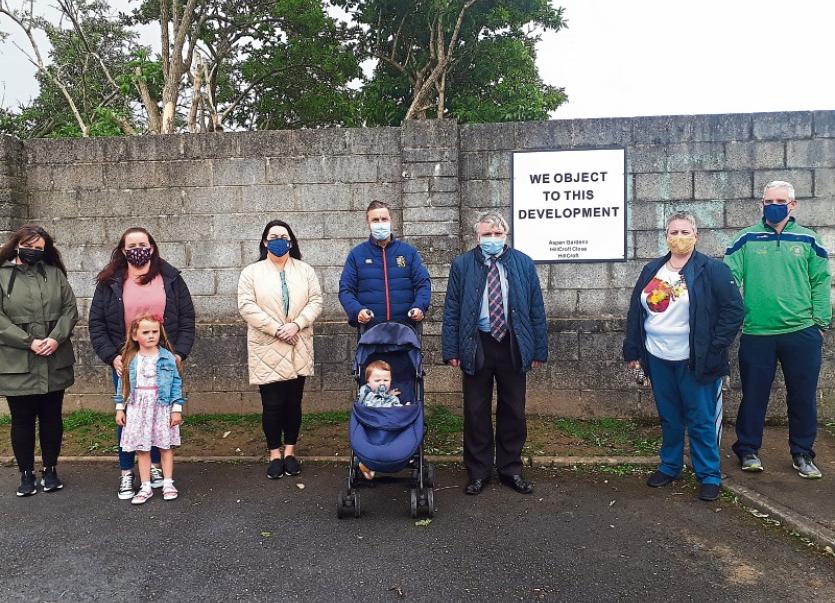 HUNDREDS of local residents have signed a petition in opposition to a plan to develop a new housing estate near the St Patrick’s Road in the city.

There is huge concern at a project by Michael Murphy Homes to construct a new housing estate in a field beside Hillcroft Close in Singland.

And local residents have also begun to object to the proposals which are currently before Limerick City and County Council.

They are being supported by local TD Willie O’Dea and councillor Catherine Slattery.

Alison Flaherty-Bedford pointed out if the development gets the go-ahead, it will see the knocking of a huge wall, and the loss of a green space in Hillcroft, currently a cul-de-sac.

If the plans get the go-ahead, the green space will be turned into a right of access into the fields where the housing is planned.​

“You see the kids playing on the road? They can do this because of the fact it’s a cul-de-sac. We have a huge issue with the amount of traffic which will be on this road. We already have awful issues with parking and trying to get up and down on weekends and in the evening time. If you put another 42 duplexes and four semi-detached houses in there, possibly meaning two cars per house it’s a lot of extra traffic,” she said.

At the heart of the development is 42 duplex units in four three-storey blocks.

It is this which concerns Aspen Gardens man Noel Stewart, who will be overlooked by these units.

He said: “It will finish just beside my house. Obviously I don’t want to be looking into people’s homes, and I don’t want them looking into mine. We know houses need to be built, but at what cost? There are other pieces of land in the city.”

Mr O’Dea said there needs to be an overall masterplan for the St Patrick’s Road area if this field is used for housing. He described adding the extra houses and using the Hillcroft access as “dangerous, premature” and “an absolute no-no”.

Cllr Slattery – whose petition has almost 300 people – added: “The residents are distraught their cul-de-sac is being taken away. They purchased their properties on the basis that they’d be living in a cul-de-sac. None of us object to housing being built. What we object to is this wall being knocked, plus a massive increase in traffic coming in and out.”

The developer did not return a request for comment from the Leader.