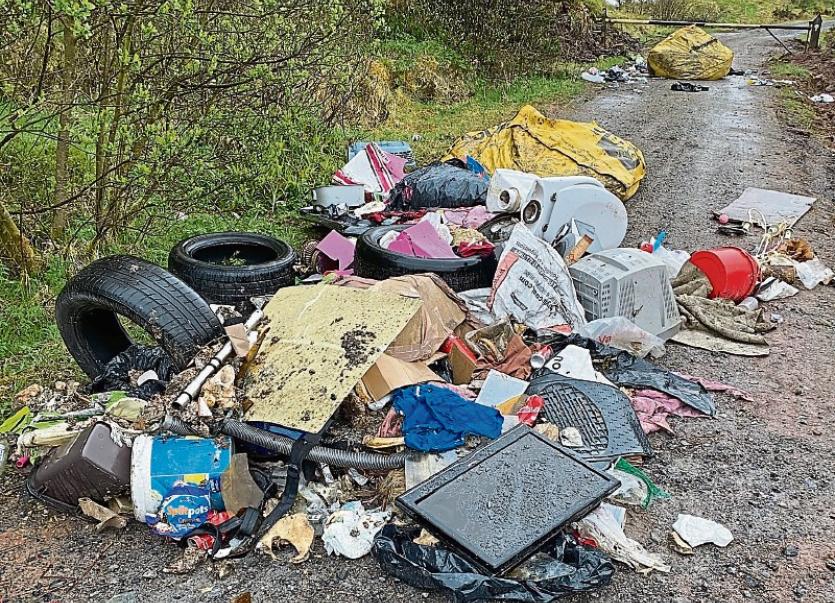 Photographer Sean O’Riordan captured this dumping on the Ballyhoura trail, near Ardpatrick

LIMERICK councillors are to push the government to pass legislation which will allow CCTV footage to be used as evidence in court cases involving dumping.

At this month’s council meeting, a notice of motion submitted by Newcastle West’s six members was unanimously passed.

At present, local authorities cannot install CCTV for cases like this without the permission of the garda commissioner.

But councillors want this to change following a spate of dumping incidents in recent months.

Fine Gael’s John Sheahan proposed the motion, saying: “If CCTV is good enough to identify a culprit, it should be taken on,” with Fianna Fail member Francis Foley seconding the notice of motion.

Cllr Liam Galvin, Fine Gael, added: “When we have technologies to catch criminals destroying our communities and our parishes the way they are. We have a minority group disposing of their rubbish in the way they wish.”

While Fianna Fail councillor Mike Donegan pointed to dumping in the Ballyhouras.

“We saw this as late as this past weekend in Ardpatrick where on a trail road, a skip load of household rubbish, tyres and everything [was dumped]. Absolutely scandalous. I hope we can have CCTV prosecution,” he said.

Cllr John Costelloe, who raised the issue in the metropolitan district said: “The biggest issue is GDPR, which is prohibiting convictions. It’s deeply frustrating for law-abiding citizens to have state-of-the-art cameras and their not doing their work in the way they should.”