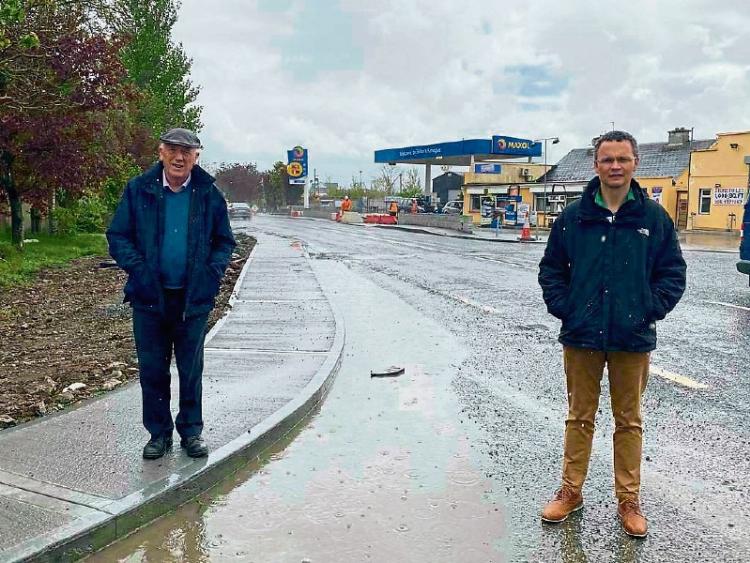 NOW that roadworks are nearing completion in Banogue, attention is turning to O’Rourke’s Cross, just up the road.

Minister for the Office of Public Works, Patrick O'Donovan said the traffic calming works in Banogue, which are costing €608,000, are “a real example of the Government’s investment into a rural community in County Limerick”.

“After first being appointed as a Minister in the Department of Transport in 2016 I was anxious to get the traffic calming projects in Dromkeen, Kilcornan and Banogue included together with a number of other works. Dromkeen and Kilcornan have been finished and Banogue is now under construction and almost complete,” said Minister O’Donovan.

The news will be welcomed by commuters on the main Limerick to Cork road as delays on either side of Banogue can be over 20 minutes at peak times.

Minister O’Donovan said the works were very welcome as it is “a busy section of the N20” and “a dangerous section of road”.

“I’ve had so many local people contact me in relation to this, including parents of the local school and people who want to cross the road to the shop or who travel through Banogue daily, telling me of the need for this, so I wanted to ensure that it was pushed forward,” said Minister O’Donovan.

He said that he and local Fine Gael colleague, Cllr Stephen Keary were delighted to see the works nearing completion.

“Banogue is a small community but this funding of €608,000 from the Government is, I know, very welcome by the community because many of those who had for years campaigned for the works to be completed have been in touch with me.

“I know that these can take time with planning and other considerations which have to be gone through. Banogue is an example of what can be achieved within Government when that is done,” said Minister O’Donovan.

He added that he has recently met with the council in relation to Rourke’s Cross in light of the recent An Bord Pleanála decision. The board confirmed the compulsory purchase order “without modification”.

“I have been consistent from the start in that I support the local community, who want this junction addressed and a roundabout installed. The roundabout needs to be built and I have told the council that and I will be making my views known both to TII and the Department of Transport as well. We have dealt with Banogue, we must now deal with Rourke’s Cross and ensure that the road is made safe for all road users,” said Minister O’Donovan.