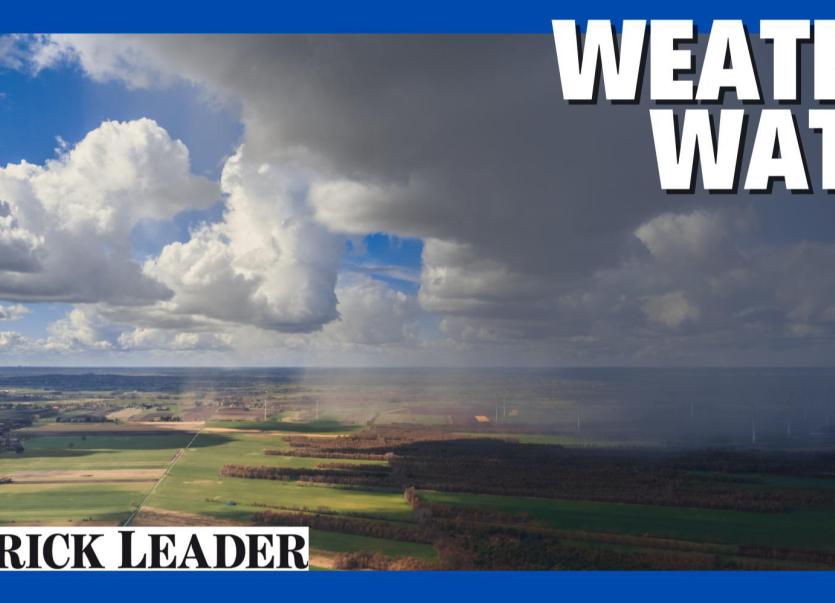 Mist and fog will clear on Monday morning. A dry start for Limerick with sunny spells. Scattered showers along the west coast will extend eastwards across Munster during the morning. A few may turn heavy but showers will become isolated during the afternoon. Slightly cooler than today with highs of 11 to 14 Celsius in moderate westerly breezes.

NATIONAL OUTLOOK
OVERVIEW:
Similar temperatures for the week ahead, with a mix of showers and dry spells during Tuesday and Wednesday. There is some uncertainty regarding the track of a depression on Thursday, which will bring a spell of wet and windy weather.

TUESDAY: Scattered showers mixed with sunny spells. Showers heavy at times in Munster and Leinster. Highest temperatures of 12 to 15 degrees with a light or moderate westerly breeze.

TUESDAY NIGHT: A mix of dry and clear spells with scattered showers. Showers will mainly affect the west and northwest where they will likely be prolonged. Lowest temperatures of 5 to 8 degrees with light westerly winds.

WEDNESDAY: Outbreaks of rain or drizzle in the morning, becoming largely dry during the afternoon with sunny spells in many areas. Showers will however continue over Ulster through the day. Highest temperatures of 13 to 16 degrees with light or moderate westerly winds.

WEDNESDAY NIGHT: A relatively mild night with rain spreading from the southwest to most areas from early in the night, as winds strengthen, increasing strong in coastal areas.

THURSDAY: Higher uncertainty than usual regarding the forecast for Thursday, with wet and windy conditions likely in most areas during the day. Rain clearing to showers later on Thursday. Highs of 10 to 13 degrees. Showers continue Thursday night.

FRIDAY: Friday will remain unsettled with widespread showers and a risk of some being heavy or thundery. Quite breezy also. Highs of 12 to 14 degrees.