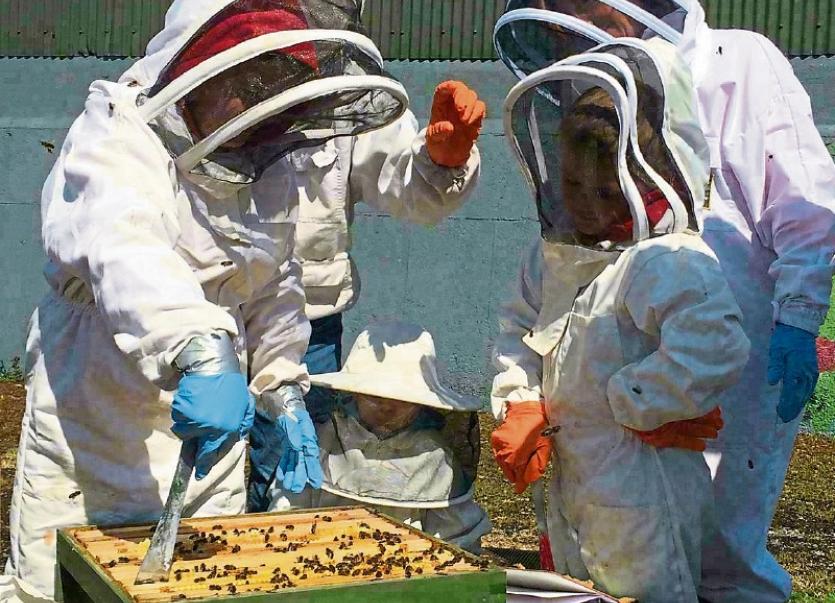 TWO years ago a swarm of bees descended on Limerick city one summer afternoon causing “panic” on the streets. And as the month of May buzzes in once again, so does the start of bee swarming season.

But if you do happen upon a swarm, do not be afraid, says local beekeeper Pauline Walsh from Knocklong “as the bees are busy looking for another home and with bellies full of honey are not aggressive unless you interfere with them”.

Swarming in Ireland typically occurs in May and June, though swarms can also be seen later into the summer.

“Our bees are now awake and growing in their colonies and soon they will multiply enough to need to expand. They do this by swarming,” explained Pauline who is a founder member and secretary of 3 Counties Beekeeping Association.

“To do this they prepare a new queen and when she is almost ready to be born the older queen is slimmed down so she can fly and take half the colony with half the honey stocks with them to start their new hive. When bees swarm they will all take to the sky and those who have never seen one can be panicked.”

Bees will hang in a group which resembles a bunch of grapes which can be quite big.  “If one finds a swarm it is advisable to leave them alone and contact a beekeeper who will safely remove and re-home them keeping both bees and public happy,” said Pauline.

One of Pauline’s great joys is sharing the knowledge she keeps acquiring from more senior beekeepers.

“We have a junior section in our local beekeeping association which is based in south east Limerick covering west Tipperary and north Cork though we have members from Clare, Dublin, Kerry, and Derry.”

Another joy for Pauline was the creation of Tigín Honey - a local Irish honey supplier. “Last summer left us without, as the bees needed all they had to survive the winter. Hopefully this year will be better for the bees and therefore for honey production where excess honey can be harvested to be bottled and sold locally.”

Some of Pauline’s grandchildren – the Powers from Fedamore - are interested in the art of beekeeping and when she has the new season honey their comments are, ‘Granny, I just love the taste of new season honey’, like professional honey samplers.

“The eldest Luke, who is now almost 10  started when he was three, his brother Conor, almost eight, when he was two. The latest recruit, Darragh, is two now and showed interest at his first visit recently.”

Members of the 3 Counties Beekeeping Association would gladly assist in swarm collection in accordance with present restrictions.