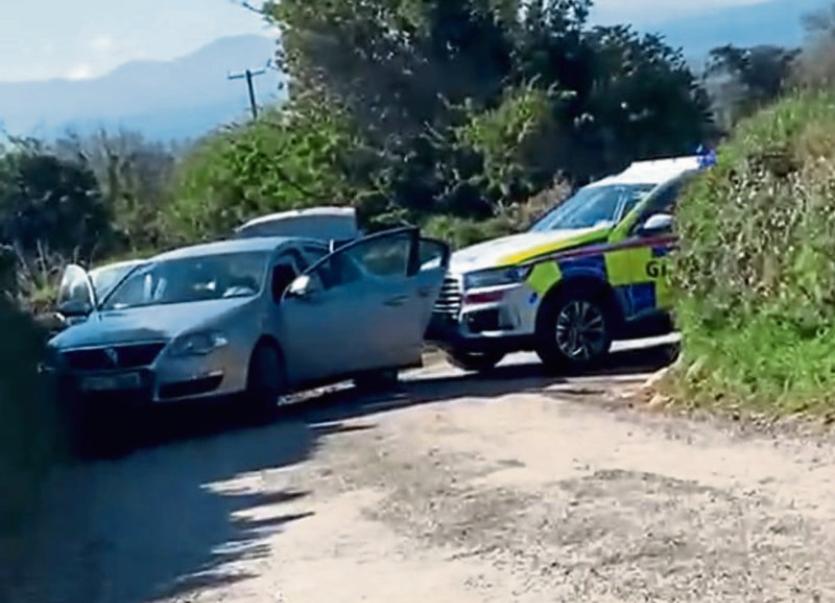 GARDAI didn’t leave anything to chance during a manhunt in a forestry area of Cappamore on Sunday morning.

The search followed a garda chase and a collision which saw a patrol jeep being crashed into. The driver of the other vehicle then fled on foot.

Armed gardai, plain clothes officers and a helicopter were called in to help locate the missing driver. Four hours later a male was found hiding by gardai.

It all stemmed from a dangerous driving incident that took place in Murroe village around 9am.

A spokesperson said: “Gardaí observed a vehicle driving in the area which failed to stop for gardaí. A managed containment operation ensued and the driver of the car crashed into a ditch.

“While reversing out of the ditch, he reversed into a garda vehicle. The driver fled the scene on foot and the female passenger remained at the scene. No persons were injured during the incident.”

After the male was located some hours later, he was arrested and detained in Bruff Garda Station under Section 4  of the Criminal Justice Act, 1984.

“The man, aged in his mid-30s, has since been released without charge and a file will be prepared for the Director of Public Prosecutions in relation to this matter,” said the garda spokesperson.

Local councillor, Martin Ryan praised the actions of the gardai.

“Well done to the gardai – fantastic work. I’m glad that nobody was injured,” said Cllr Ryan.

The unusually high level of garda activity caused commotion in Cappamore with many rumours swirling around. A damaged patrol jeep and a Volkswagen Passat was seen being towed through the village.

One local told the Leader it was “the talk of the place. Everyone and their nana was out walking or on bikes to see what was happening,” said the local.