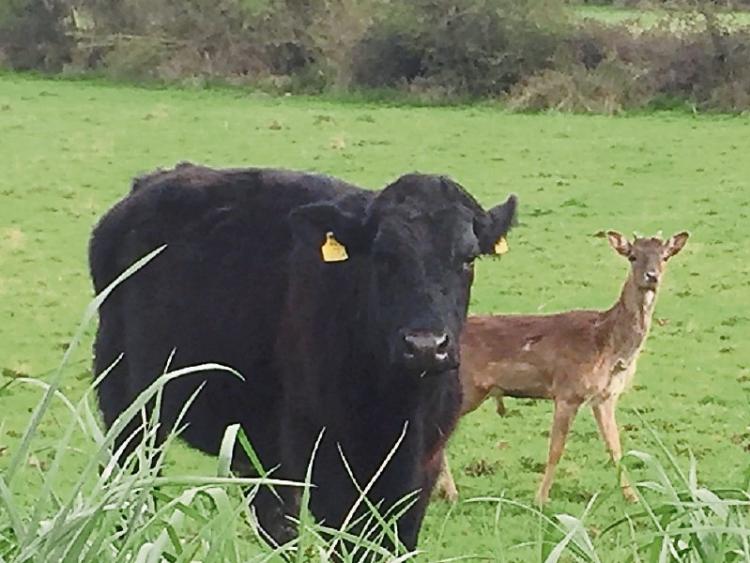 Best friends: A bullock and a fawn in Herbertstown

PEOPLE in Herbertstown have been fawning over a mystery new arrival that has become adopted by cattle.

A local sent in this great photo of a young deer happily grazing with a bullock.

They said the fawn just appeared a few weeks ago.

“It’s a bit of a mystery. There are no deer farms around Herbertstown and no woodland either. He or she just turned up one day,” said the local.

The fawn has been made feel very welcome by Herbertstown’s four legged inhabitants.

“It seemed to adopt the other animals as his or her family or it was adopted by the cattle. There was one particular bullock that the fawn bonded with. He seemed to follow it up and down the field,” said the local.

The fawn has just become part of the family.

“It just grazes away with the cattle. When the farmer feeds them nuts or whatever, the fawn is down there feeding as well at the trough. I took the photograph and thought I would send it onto the Limerick Leader.

“Tis all bad news at the moment and this is something different and nice,” said the local.

Coincidentally, it is almost a year ago that the Leader reported on a pig that thought it was a cow.

Angie Fitzgerald, of Adare, said the black and white British Saddleback loves going in to the fields and mixing with the cows.

“You would often find him in the middle of the cows eating with them or sleeping on the ground with them. They were a bit suspicious initially but they got to know him and he is part of the crew,” said Angie.