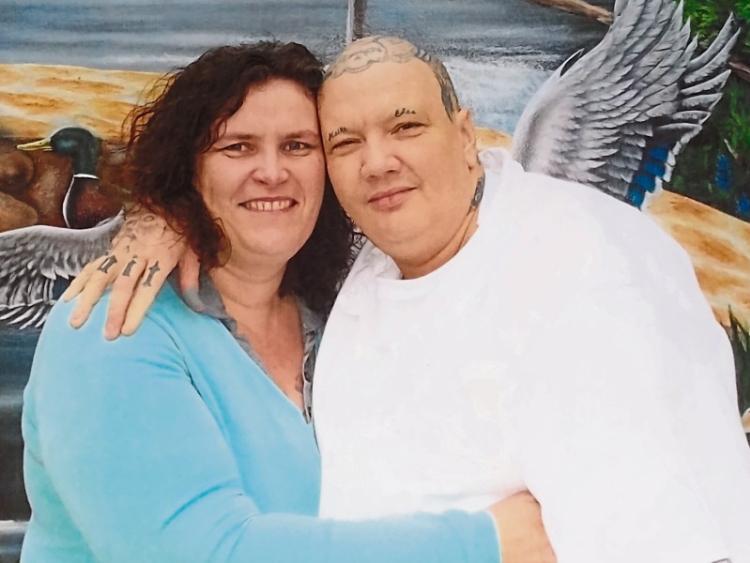 William Schiffert says it was karma or destiny that brought him, while being locked up in a Texas prison, and Heike Phelan, who lives in the Kilmallock are, together

A DOUBLE murderer locked up in a Texas super-maximum prison would love to move to Limerick with his wife upon release.

In an exclusive interview with the Leader from behind bars, William Schiffert describes how he fell for Heike Phelan, who resides in the Kilmallock area; his regret over his role in the deaths of two men and his desire to visit Limerick.

The Leader submitted questions to Heike who sent them to William. He then replied from his prison cell. This was how the couple met - through pen and paper. They exchanged letters, three or four times a week, which turned into three or four visits a year until Covid. They wed back in 2012.

Heike, aged 52, grew up in England but returned to her dad’s native Limerick in 2005. Heike, the name coming from her German mum, has recently released her third book called Convict Code about her husband’s life in a US prison.

William, also 52, said Heike has told him “so much” about Limerick and its history.

“I would love to visit when I am out of prison. It sounds amazing, and if it is Heike’s choice then to live there with her. As long as I can work to support us both then I will be happy. What I’ve learned from Heike is that Limerick has everything - mountains, rivers and beautiful villages. The photos I have seen show it as so green and colourful. It’s the complete opposite to Texas, which most of the time is dry, brown and dusty, although from what I’ve heard of the weather, maybe the Texas heat is a bonus.”

William is a convicted murderer for his role in a fatal knife attack in 2001. He received a 75-year sentence. However, due to prison reforms Heike says he could potentially be out in the next 18 months.”

If you were released tomorrow would anybody have anything to fear from you?

“I don’t believe anyone has anything to fear from me when I’m released. I have no intention or desire of returning to my old way of life. Heike has shown me that I don’t need to do that and has shown me the benefits of not being part of the wrong side of the law. The only thing I care about is being with my wife and being able to support her.”

Does the convicted double murder think about the men he killed?

“I regret the fact that either event happened. The first one, when I killed the guy, he turned up at my house and pulled a gun on me. If I hadn’t been faster, it would likely be me dead. I’m sorry he’s dead, it never needed to happen.

“The second one, I often think about that guy. It wasn’t me who killed him, but he should never have lost his life over a stupid argument. I get mad at the one who killed him, the reason I am sitting in prison for his crime.

“Because of some of the bad things I’ve done, I have tried to give something back by helping out others. I will help guys adapt and learn how to do their time when they first come to prison. I have participated in ‘Scared Straight’ programmes with kids to encourage them to stay out of prison and make something of their life. I look out for guys who are more vulnerable and targets of more predatory inmates. I have helped several guys get clean from drugs.”

There are many single men in the world who would love to meet the woman they want to spend the rest of their life with. How did William do it while being in a maximum security prison?

“I put our meeting down to karma or destiny. I think the chances of our meeting under any other circumstances to be zero. I hear guys on the phone to their families every day screaming and shouting at them, demanding more money, abusing them for not doing what they demand. I don’t understand how these idiots still have support in the free-world when they use and abuse them in such a way. Respect and integrity are what I consider important. I know if I ever spoke to Heike the way some of these idiots in prison speak to their families, she wouldn’t answer the phone again.”

What was it about Heike that William fell for?

“It was immediately obvious how intelligent and educated Heike was. I liked that. I needed someone who could stand up to me and challenge me. Heike has always done that. She has always held to her word and her principles. She has held me to account when I’ve been an idiot or done something stupid. She has educated me and spent time helping me to understand things from the perspective of the ‘normal’ world rather than the one I’ve always been in.

“She is the kindest and most generous person, but is nobody's fool. She didn’t make it easy for me to get to know her. I had to work hard to earn her trust and by doing that I learned to appreciate what an amazing woman she is. She has supported and advocated for me, something no-one has ever done before. I admire and respect her and always will. She makes me want to be a better person and I try to live up to her expectations. She’s the strongest person I’ve ever met.”

William said some other inmates are jealous of prisoners who have ‘free-world support’.

“Many of them will go to great lengths to ruin someone else's relationship, including writing to them, or getting free-world people to contact them. The only reason my wife hasn’t received more letters of this type is because the haters don’t want to spend the amount it costs for postage overseas. I’ve had haters pretend to call my wife. They say they’ve had letters and photos from her. They talk within earshot about my wife trying to rile me up. Many of them tell me I shouldn’t be telling my wife everything that happens in prison. It takes a lot of effort not to pound the crap out of them, and if I was less secure in my relationship with my wife, I would.”

What has it been like not being able to see Heike in person due to Covid?

“When the Texas Department of Criminal Justice (TDCJ) shut down all visitation because of coronavirus, it felt like the end of the world. The administration had already limited what kind of mail families could send which had a massive negative impact on inmates. With the Covid lockdown we couldn’t use the phones to call either, so we were completely cut off with no way of doing anything about it. The mail room all but stopped functioning. Staff were off sick with Covid, there was an even bigger shortage of staff than there normally is. We were kept locked in our cells for weeks at a time.

“Eventually we were allowed to make five minute calls because the pressure from families and prisoner support groups was mounting. In September 2020, TDCJ finally implemented a video visit system. The video visits have been a Godsend for Heike and myself. For now it’s only once a month, for one hour and costs ten dollars, but it means we’ve been able to see each other. We are also lucky enough to have phone calls if we aren’t on lockdown for days or weeks on end. As long as I can see for myself my wife is OK, then I’m good.”

We’ve all seen movies and documentaries on prison life in the US and the racial tension - is this the case?

William says the three books Heike has written reveal the ins and outs and intricacies of prison life.

“Heike’s books are about me and my life and experiences in prison. She was initially shocked at many of the things that went on behind the walls, but over time she realised it was the norm. She wrote the books as a way of informing people what really goes on in prison.

“She always mentions about movies and documentaries that are presented from the administration's perspective with just enough sanitised shock value to make it palatable to the free-world. She wanted to write the books from the opposite perspective, from the inmates and family perspective. How and why things happen the way they do. I was surprised when I read the books and she had captured the situations exactly as they happened.”