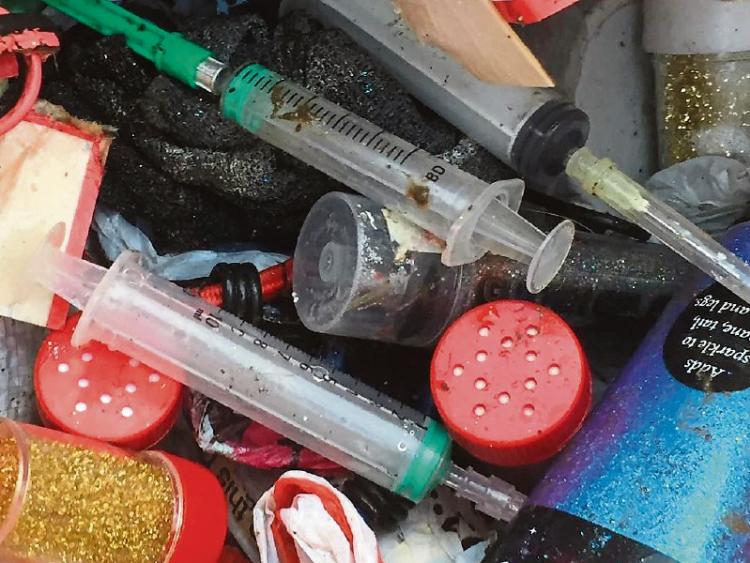 JOE Hurley has seen many things as a water bailiff for almost 20 years on the Deel and the Shannon, but he never seen dumped, used, syringes.

Now retired, Joe, aged 66, made the discovery at a popular fishing spot in Lower Grange, Newcastle West. The syringes were among many other bags of rubbish dumped at the location on the River Deel. Bulbs from cars were another unusual discovery compared to the more common household waste.

“It is disgusting. We are four years trying to get young lads involved in fishing  and when they look and see things like that on the bank of the river, where you are going?

“Syringes frighten me. It is scary stuff. Those needles would go in through waders no problem. We don’t know what they were used for,” said Joe.

He said bags of rubbish are regularly thrown in over the bridge at that spot to be brought away by the river.

“We’d be in the river at night time. We’d be wading through the water and God only knows what you are going to stand on. If you got a nip from one of those syringes, what would you come up with?” asked Dave.

He said contact was made with the council about the dumped rubbish but it hasn’t been removed.

“They are there for weeks. The bags are plain to see. It is a crazy situation. We’ll be fishing in a couple of weeks time so hopefully they will be gone by then,” said Dave.

Minister Niall Collins said he is aware of the situation at Lower Grange, Newcastle West.

“That is one complaint. I had another complaint today at Creeves between Shanagolden and Askeaton. People have reported incidences of littering to the council and the response is very poor. Despite Level 5 restrictions these issues are essential and they should be addressed by the local authority,” said Minister Collins.

The Limerick Leader put the Deel Anglers Association's concerns over the syringes and dumped rubbish to the council.

A spokesperson said: “Limerick City and County Council is very conscious of the need to help and support communities as they keep their areas clean and tidy.

“Over the past number of weeks, the council has removed two van loads of rubbish collected by volunteers along the River Deel near Askeaton.”

The council spokesperson added: “We would appeal to the anglers to get in contact with the Newcastle West area office so that one of them can accompany our staff to the location so the rubbish can be removed.”