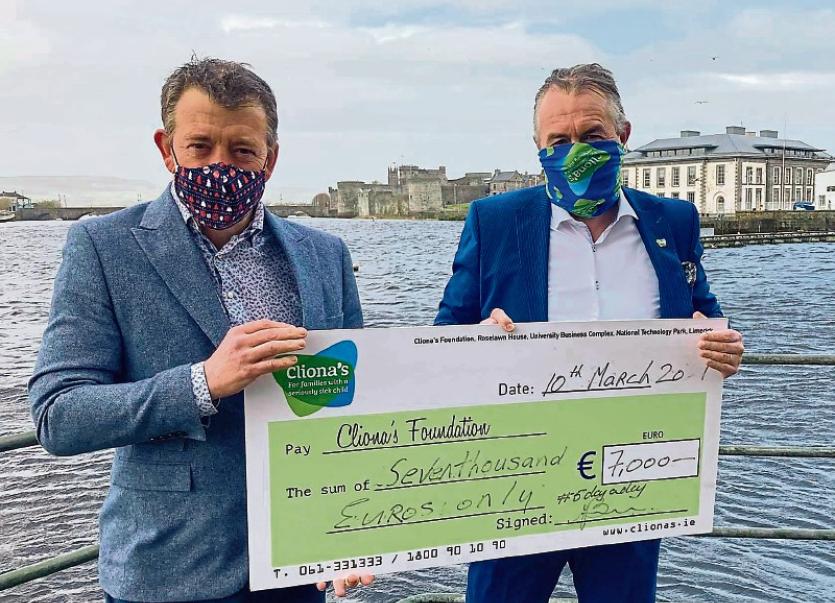 Graham Burns, CPL, handing over a cheque to Brendan Ring, of Cliona’s Foundation

Like all charities, Cliona’s Foundation’s fundraising plans and traditional income opportunities have been hit hard by Covid.

In the absence of any annual State support, they are faced with a major challenge to secure the required funds to keep providing services to families caring for a seriously sick child.

“We were wondering how we were going to survive but we were blown away by the way old and new supporters came up with new ways of raising funds,” said Brendan Ring, co-founder of Cliona’s.

They had webinars, a Work Life Blend Book, virtual runs, barbecues and music sessions and much more.

“The income from these along with money from other sources supported 110 families during the year. Families which need this support more now than ever,” he said

2021 is looking like a repeat of 2020 with charities having to be innovative. Cliona’s was supported in their New Year efforts by the #5kaday in January, initiated by a very loyal supporter Graham Burns from CPL.

“People could walk, run, cycle and were encouraged to post their daily efforts on social media but also make a donation to the GoFundMe page. We set a target of €2,000 and hit the ground on January 1 with wonderful support from all over the country. It was fantastic to see Lough Derg Development come on board donating €500 for Hillary Cleary to be their ambassador and partake in the daily challenge,” said Graham.

As the donations approached the target up stepped Carl Widger, of METIS Ireland, who bravely set the BHAG (big hairy audacious goal) of €3,000 by offering to shave his head if donations reached this figure.

The response was fantastic and by the end of the month Carl had fulfilled his promise. In total, €7,000 has been raised for families that need it the most.