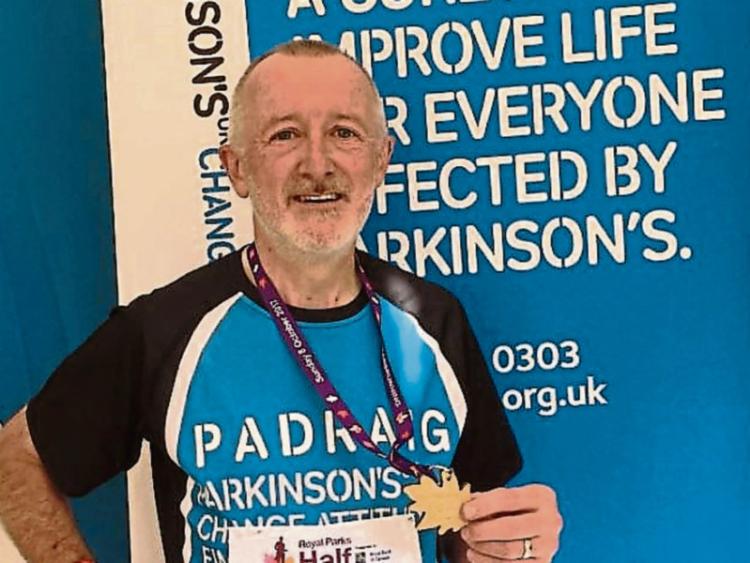 PADRAIG Barry remembers walking into a neurologist’s office in the UK, where he was based at the time, and the first thing he was asked to do was to walk up and down the corridor.

“When I went back into the neurologist’s office, he said, ‘Mr Barry, I’m sorry to say, I believe you have Parkinson’s’. Just like that.”

The Pallaskenry native who now resides in Adare was diagnosed with early onset Parkinson’s. He was just 53.

Even though Padraig knew about Parkinson’s - “it was the condition actor Michael J Fox had” - he says he had “no idea” that he had it himself.  “Nobody had mentioned the ‘P’ word. It never crossed my mind,” he says.

The father-of-five was speaking out ahead of Parkinson’s Awareness Week which concludes this Sunday.

“I was diagnosed in December, 2012,” explains the 61-year-old. “I had actually taken up running for my sins about a year to a year and a half before that.”

After running his first half marathon in September 2011 Padraig went for a physio session and the physiotherapist noticed a very slight tremor in his right leg.

“They estimate that by the time somebody is diagnosed with Parkinson’s they probably have had symptoms going back about 10 or more years,” says Padraig.

His earliest symptom - even though he didn’t realise it at the time - was weakness in his right arm. When he would be out walking, his wife Catherine would say “swing that right arm”.

Twelve months after the tremor in his leg was detected, Padraig received his diagnosis. “What people don’t realise about Parkinson’s is that the physical symptoms you see - tremors, stiffness, poor walking gait and poor speech - they are the tip of the iceberg. The things that go on in the background are lack of sleep and anxiety.”

Padraig continued to run every morning and was running around three or four half marathons every year and he completed the Dublin City Marathon in 2016.

But, as is the case with any progressive condition, it hasn’t been all plain sailing, and there have been times when Padraig has felt socially isolated as a result of his condition.

“Because people are suffering from a tremor or they have stiffness, naturally it leads to a bit of social isolation by people’s own choice. I started to isolate. There were times in the supermarket when I wouldn’t have been able to get my wallet out of my back pocket.”

He was very fortunate that the neurologist in the UK put him forward around two years ago for surgery called DBS, deep brain stimulation surgery.

DBS is the most commonly performed surgical treatment for Parkinson's.

A surgeon places thin metal wires in the brain; these wires send electrical pulses to the brain to help control some motor symptoms. It can help ease motor symptoms and decrease medication needs in some people.

“The essence of what they do is drill two holes in each side of the head, put electrodes like wires into your brain and they wire that to a pacemaker unit that sits in the chest cavity,” Padraig explains.

“That helps to stimulate the brain. It has been the preserve for many years of people who are at a very advanced stage of Parkinson’s where the drugs no longer worked. As the success rate of the surgery has improved over the years they are thinking of offering it to people who are younger, more active, and who can benefit more from it.”

Padraig’s surgery was delayed due to the pandemic but he underwent the procedure last November “and it has absolutely transformed my life”.

“In some ways I’m slow to shout about it as it is still early days, and DBS isn’t for everybody and it isn’t available for everybody - you can’t have the surgery yet in this country. There are a number of people from Limerick who have had it.

“They let the system settle in for about five or six weeks and then they start the programme. They typically find that it reduces your need for medication by about half. Some people reduce their medication much more and for some people there’s isn’t much of a reduction.

“It has improved my quality of life and my confidence. My speech goes up and down a little bit. And I have to say I’m sleeping like a baby since I had it done as well which is wonderful.”

Covid, needless to say, complicated things for Padraig as his neurologist is in the UK.

“I have this little remote control now so that I can change the settings myself and the signal level to the brain. I’m continuously tweaking it because even three or four months later the brain is still adjusting to what’s going on up there. The wires are all internal. There are a couple of big bumps in my head. It doesn’t cure you, there is no cure.”

While every case of Parkinson’s is unique to the individual, Padraig's story offers hope to those with the condition.  He still loves his game of golf (restrictions permitting) and his DIY.

“I also love my hurling - I’m a Limerick hurling fan and of course follow the rugby. I also like cycling.

“The last time I featured on the Limerick Leader was ahead of a cycle a group of us in Adare were planning on doing from Mizen Head to Malin Head and we did it in June 2018 so we did complete it in case anyone was wondering!” he smiles.