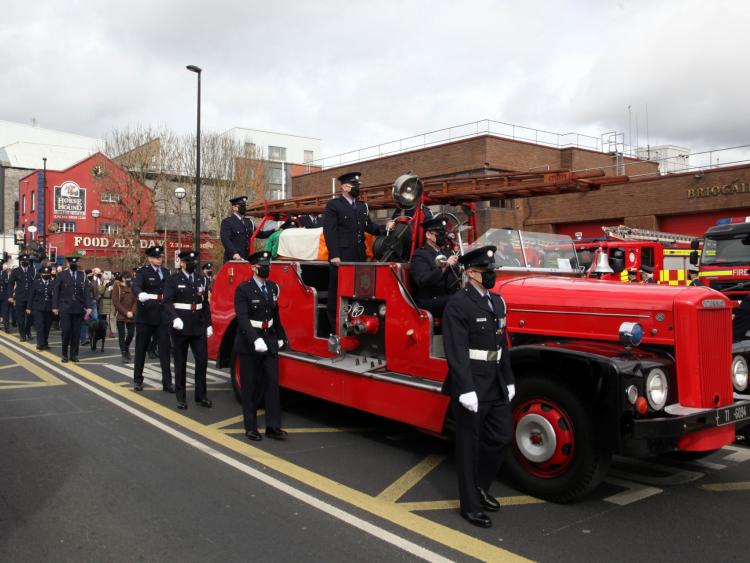 IN LIFE, the late Des Fitzgerald stood shoulder-to-shoulder with his colleagues in Limerick Fire and Rescue Service.

Tragically, in death, they shouldered his coffin to and from his funeral Mass in St John’s Cathedral this Thursday. And, poignantly, it was Des' fellow firefighters from White Watch who carried their brother to his final resting place in Mount St Lawrence Cemetery.

As the hearse - a 1952 Dennis TI vintage fire appliance - made its way slowly to the cemetery it paused outside the station on Mulgrave Street for a guard of honour.

Heads were bowed as the bell was rung. Once. Twice. Three times. It was a final salute from Limerick Fire and Rescue Service to a great colleague who died on Good Friday. Mourners stood on the street in a socially distanced manner to say their goodbyes.

The Mass was concelebrated by Fr Robert Swinburne, who taught Des in the '80s in Copsewood College, Pallaskenry, and Fr Chris O’Donnell, now based in Kilmallock.

The coffin was draped in the Tricolor. Perched on top, Des' navy firefighter’s hat. Symbols of Des’ life brought to the altar included his boxing gloves, a CD to reflect his love of music and a certificate of bravery.

"It is in recognition of the bravery of a firefighter saving human life at the Abbey River, Limerick City. He was a courageous person," said Fr Swinburne.

After the moving ceremony concluded, Des’ daughter Aisling spoke of her beloved dad. He was "some man for one man", she said.

"My dad was the most amazing person in my life. He was the most hard-working man I have ever known and that includes when he was inside and outside of work. He adored his job, his family, his work family and not forgetting his little furry best friend and running buddy that he used to run the legs off of seven-days a week, Lucky the dog.

"My dad has saved hundreds of peoples’ lives in the nine years that he has worked in the fire station. And for that he has received two big awards and was known for being Limerick’s hero. I am the proudest daughter," said Aisling, who also spoke of cherishing the many great memories she has of her father including going to metal concerts together.

"I am so happy me and my dad had a special bond in all my 20 years but I am just devastated it isn't more than that. Heaven has now gained the biggest hero but I know now I have a special guardian angel looking over me and keeping an eye on me. Rest in perfect peace, daddy. Lots of love from your little princess," said Aisling.

"As our family try to comprehend the sudden loss of Des we are all so amazed and humbled by the condolences and help we have received from family, friends and most particularly his colleagues at Limerick Fire Station. Des was a husband, a father, a son, a brother, a firefighter, a boxer, a rogue, a neighbor, a friend, a teacher, a consoler and a carer," said Kevin.

He said every step they take from now will be accompanied by the shadow of his loss.

"You represented all that was good in our family. You were selfless in your devotion to your family and your job. Eoghan, Aisling, Lynn and your wife are your legacy along with your kind works in and outside your job.

"Your unity and love for Elaine was an example to us all. You both packed a lifetime of memories in 25 great years. Des was a modest man and had no hunger for material things. He was happiest when everyone was happy," said Kevin.

He said Des helped save many lives while being the best husband, father, son and brother he could possibly be.

"We will never forget you," said Kevin.

May Des rest in peace.