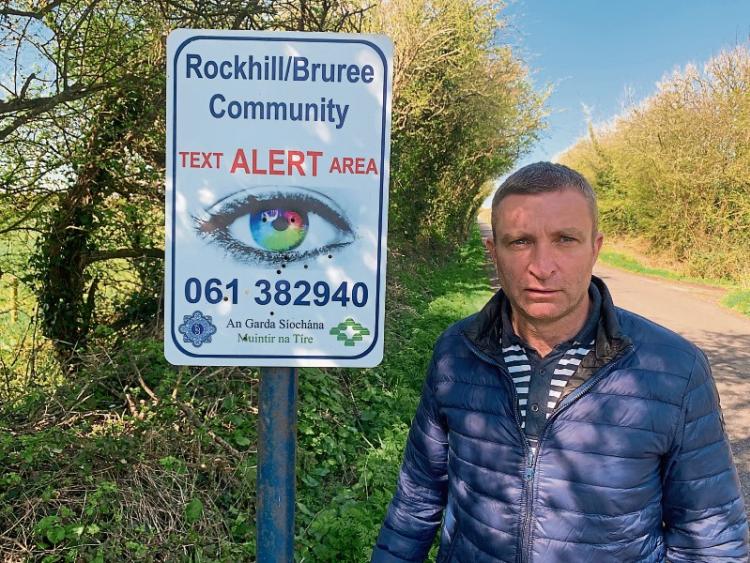 CRIMINALS have displayed their contempt for the law-abiding citizens of Bruree, and gardai, by shooting at a community alert sign.

The bullet holes, believed to have been made with a rifle, were targeted on the eye in the Rockhill / Bruree Community text alert area sign.

The vandalism of the sign, located in Garouse, Bruree, has taken place in recent weeks. It is the latest in a litany of offences including burglaries, criminal damage, drug dealing and anti-social behaviour which have blighted the picturesque village.

“The fear of God is in people,” one local told the Leader.

“A hidden CCTV camera, also in Garouse, was smashed on Tuesday night, March 30. They obviously didn’t want to be captured on camera. There is drug dealing going on left, right and centre,” added the local.

Minister Niall Collins (pictured with the sign) said the bullets fired at the sign is an attempt at intimidation.

“But the local community, who are very resilient, won’t succumb to this intimidation. I have been in contact with gardai about this matter,” said Minister Collins.

Bruff Superintendent John Ryan confirmed that a second garda has recently been appointed to Bruree so there are now two full-time gardai in the small village.

He appealed to people to contact gardai in Bruff (061 382940) regarding issues in relation to anti-social behaviour and criminal activity and they will act on them.

“Any complaint will be fully investigated and dealt with appropriately,” said Supt Ryan.

The local resident told the Leader the small crew of criminals are “giving the two fingers to all of us”.

“The guards are doing their best but they can’t be here 24/7. However, extra patrols would help as people are very fearful. Some used to walk to the shop and now they won’t leave their home without getting a lift outside their front door. It’s no way to live,” continued the local.

“People are drunk on the road, fighting in the cemetery, there has been a lot of burglaries and drugs are rife. There is always something going on. It’s just constant. It’s just hanging over everybody and the shots fired at the community alert sign was like an attack on all of us," added the local.