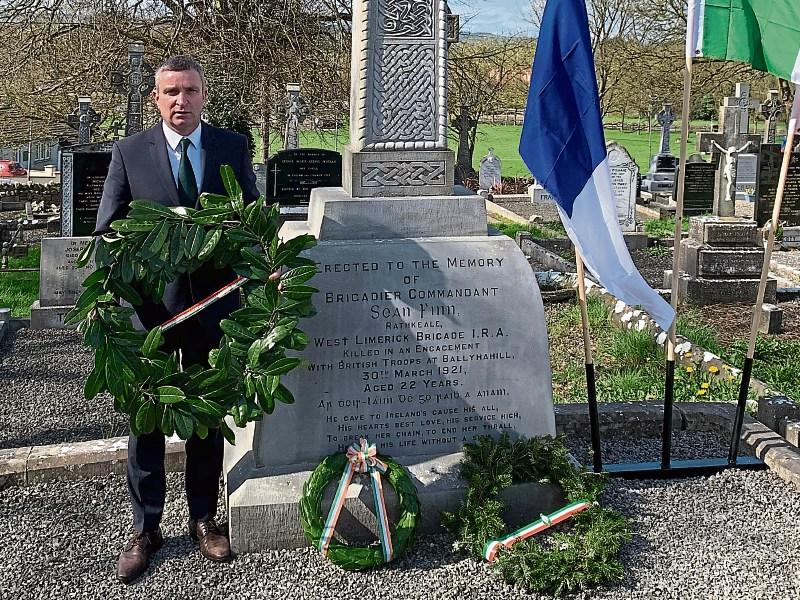 ONE hundred years ago Brigadier Sean Finn, Commandant of West Limerick IRA, was shot and killed by Crown forces.

His death saved many other men. Born in Rathkeale in 1897, Mr Finn’s family had a grocery and bakery business. Growing up he became very interested in all aspects of Irish culture. At a very age his ability to lead and inspire others was apparent. In 1915, Mr Finn became Captain of the Rathkeale Volunteers.

After 1916 he became very active and organised different Companies in the West Limerick area. Subsequently, in recognition of his outstanding personal courage and dedication, he was appointed Brigadier Commandant of the five West Limerick battalions.

Mr Finn and his flying columns made west Limerick untenable for the British.

Even in death he managed to save many of his friends and fellow Volunteers. It occurred on March 30, 1921. Jimmy Collins, later a TD, a grandfather of current Minister Niall Collins, was present at the ambush.

A witness statement given by Mr Collins, of the West Limerick IRA, describes what happened that fateful evening.

“Three lorry loads of  RIC and Black and Tans arrived either from Adare and Newcastle West,” wrote Mr Collins. Mr Finn heard shots fired from where he was billeted in the Ballyhahill area. He and a number of others ran for their rifles, gave the alarm and came out to investigate.

“By this time , the lorries had come within a few yards of them. While all of the IRA men were running through a ploughed field, in single file, Finn was mortally wounded and another IRA man, named Quane, was wounded through the jaw.

“The death of Finn saved the other men. When the RIC and Tans saw his dead body, they were so anxious to collect it they failed to follow up the retreating men, thus saving them from certain death,” wrote Mr Collins in his witness statement.

One hundred years later, his grandson Minister Niall Collins laid a wreath on behalf of the Collins family at the grave of the late Mr Finn in Rathkeale Cemetery.

“I felt obliged to mark the occasion on behalf of my family and the wider community as a local TD. Unfortunately we can’t at this time give these men the proper recognition which they deserve on the 100th anniversary of their deaths but in time, when circumstances allow, we will organise a more fitting commemoration,” said Minister Collins.