Limerick councillor drives home claim he was ‘muzzled’ during meeting 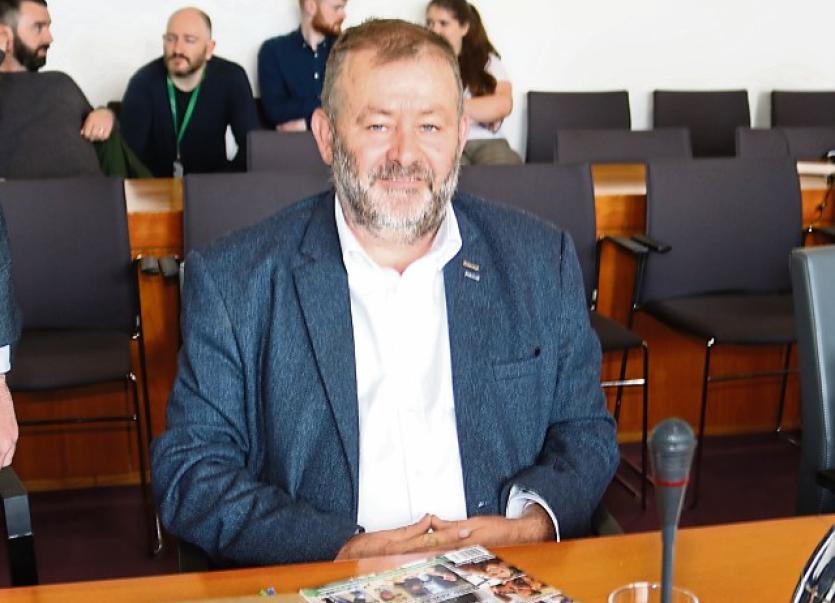 Cllr Sean Hartigan: "Any housing development which happens, so long as its sustainable, is very welcome"

GREEN Party councillor Sean Hartigan has denied claims he was driving during a council meeting – and said the mayor “muzzled” him.

During last week’s full council meeting, held virtually due to Covid-19 level 5 restrictions, it was noted by many members, including Mayor Michael Collins and Cllr Jerome Scanlan that Hartigan was in his car.

“Ye must be driving home for Christmas,” the Independent Feohanagh councillor quipped, while Mayor Collins said afterwards: “If he was taking the meeting seriously, he wouldn’t have been in his car at the time.”

During the meeting, a row broke out between Cllr Hartigan and the first citizen over the county development plan.

The City East member was the only person to speak out against the idea of once-off rural houses.

When he tried to speak for a second time on the topic, he was not allowed by the mayor, with Cllr Hartigan visibly upset, gesturing and speaking without sound accompanying the scenes from his laptop camera.

This prompted him to put out a tweet after the meeting, in which he wrote: “Mayor of Limerick Michael Collins grossly biased on discussion on one-off rural housing at today's council meeting, not allowing free discussion on the matter.”

Mayor Collins turned fire on his council rival, describing his conduct as “shabby”.

“I was fair to everyone at the meeting. I had said at the outset of the meeting everyone would be left speak as per Standing Orders. It’s a bi-monthly meeting. It’s the most important meeting of council where important decisions are taken,” he said.

Cllr Scanlan said: “It’s unusual someone might attend a council meeting from behind the wheel of a car. It seems rather odd to me.”

Speaking to the Limerick Leader, Cllr Hartigan hit back, saying: “There is no evidence I was driving. You could clearly see in the meeting I was pulled in.”

He accused Mayor Collins of trying to “deflect” from the matter of one-off homes.

“The fact of the matter is I was muzzled. He was trying to muzzle anyone who was speaking for national policy, which is Fine Gael and Fianna Fail policy, not Green policy, that we move to a more realistic, sustainable model of housebuilding, instead of the haphazard housing situation driven by local councillors whereby people got planning permission in totally unsuitable locations.”

He said this approach has caused “immense problems” with traffic, road maintenance and the provision of electricity and broadband.

“What I wanted to say at the meeting was constructive,” Cllr Hartigan insisted.